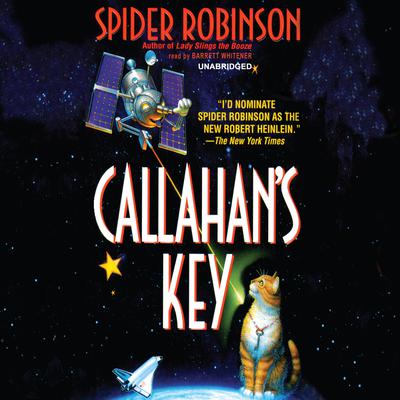 Nobody blends good science with bad puns as brilliantly as Spider Robinson, as his legion of devoted fans will attest. Now he's back with the latest chapter of the Callahan saga—an improbable tale of impending doom, a road trip, space, drugs, and rock 'n' roll.

The universe in is desperate peril. Due to a cluster of freakish phenomena, the United States' own defense system has become a doomsday machine, threatening the entire universe. Only one man can save everything-as-we-know-it from annihilation. Unfortunately, he's not available. So the job falls instead to bar owner Jake Stonebender, his wife Zoey, and their super-intelligent toddler, Erin, not to mention two dozen busloads of ex-hippies and freaks, Robert Heinlein's wandering cat, a whorehouse parrot, and misunderstood genius-inventor, Nikola Tesla, who is in fact alive and well.

“[Spider Robinson] proves as consummate at maintaining suspense as he is at keeping the laughs coming. Fans and the uninitiated alike will devour this intoxicating blend of character comedy and hard SF, for Robinson’s writing remains as potentially addictive and as full of earthy delight as Stonebender’s famed Irish coffee.” —Publishers Weekly
“As usual, Robinson should please old fans and win new ones…You’ll surely come to love the eclectic cast of dozens, including everybody from a talking baby…to—why not?—the forgotten father of the 20th century, Nikola Tesla.” —Amazon.com, editorial review
“Features [Robinson’s] usual blend of homegrown wisdom and laconic humor and includes a guest appearance by the late Nikola Tesla…Fans will welcome this unabashedly rollicking SF adventure.” —Library Journal
“The fun comes from assembling a fleet of school buses, evading state troopers, and exploring NASA’s shuttle launch system. Robinson resembles Heinlein in his mild anarchism; oft-cited, never described sex; and characters that think they’re smarter than the rest of us—and are. His personal touch is recreational drugging. The results delight.” —Booklist
“Puns, booze, coffee, save the universe—not necessarily in that order.” —Kirkus Reviews
“Barrett Whitener is just terrific…It sounded like he was having a blast performing it too. Nearly every minute or so of the novel’s production a groaner pun or a ridiculous situation had me smiling or wincing—and sometimes painfully at the same time.” —SFFAudio.com