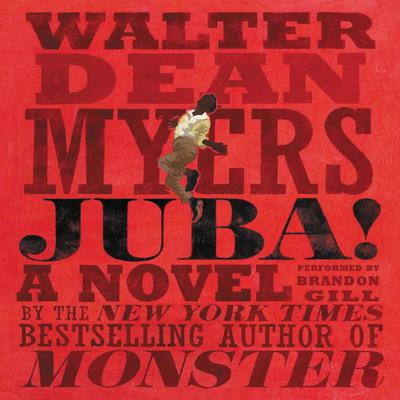 In New York Times bestselling author Walter Dean Myers's last novel, he delivers a gripping story based on the life of a real dancer known as Master Juba, who lived in the nineteenth century.

This engaging historical novel is based on the true story of the meteoric rise of an immensely talented young black dancer, William Henry Lane, who influenced today's tap, jazz, and step dancing. With meticulous and intensive research, Walter Dean Myers has brought to life Juba's story.

Includes an afterword from Walter Dean Myers's wife about the writing process of Juba!

“Juba is presented as a thoughtful, proud young man who means well and works hard; Myers gives him a direct and sympathetic voice, depicting the struggles and successes of his short life…Relationships between blacks and whites are sensitively portrayed, and issues of race are treated frankly, both in dialogue and in Juba’s reflections.” —Publishers Weekly
“William Henry Lane, also known as Master Juba, was a famous dancer in America and England in the 1840s. Myers’ final novel uses historical sources to piece together a picture of what his life might have been like…This will have appeal to readers who are interested in the history of dance or the antebellum period of American history.” —School Library Journal
“Juba’s passion, determination, and optimism—and position as a free man—during a time rife with racial injustice make his story unique…[and] offers an intriguing glimpse into America’s past.” —Booklist
“Myers draws readers into nineteenth-century New York with his wonderful characters, many based on real people, including Juba himself. Juba is engaging, passionate, and persistent, sympathetic even when arrogance and stubbornness show. The supporting cast is from all walks of life…The complicated world Juba inhabits as an African American in the free North is naturally woven in with Juba’s journey to fame…Actual newspaper articles and illustrations are interesting but sometimes make the book feel academic. Despite this, readers who follow through will root for Juba.” —VOYA
“Juba, a freeborn young black man, dreams of making it big as a dancer in antebellum New York City…Myers’ moving prose captures the dizzying speed with which the immensely talented Juba’s star eventually rises. Poignant, revealing period fiction about race and art in pre–Civil War America.” —Kirkus Reviews
“Juba and his friends…[are] well realized by Gill.” —AudioFile