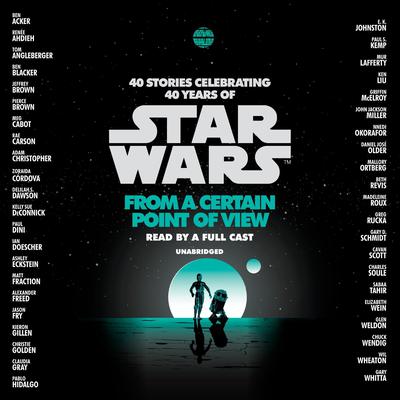 From a Certain Point of View (Star Wars)

Experience Star Wars: A New Hope from a whole new point of view.

On May 25, 1977, the world was introduced to Han Solo, Luke Skywalker, Princess Leia, C-3PO, R2-D2, Chewbacca, Obi-Wan Kenobi, Darth Vader, and a galaxy full of possibilities. In honor of the fortieth anniversary, more than forty contributors lend their vision to this retelling of Star Wars. Each of the forty short stories reimagines a moment from the original film, but through the eyes of a supporting character. From a Certain Point of View features contributions by bestselling authors, trendsetting artists, and treasured voices from the literary history of Star Wars:

• Gary Whitta bridges the gap from Rogue One to A New Hope through the eyes of Captain Antilles.
• Aunt Beru finds her voice in an intimate character study by Meg Cabot.
• Nnedi Okorofor brings dignity and depth to a most unlikely character: the monster in the trash compactor.
• Pablo Hidalgo provides a chilling glimpse inside the mind of Grand Moff Tarkin.
• Pierce Brown chronicles Biggs Darklighter’s final flight during the Rebellion’s harrowing attack on the Death Star.
• Wil Wheaton spins a poignant tale of the rebels left behind on Yavin.

All participating authors have generously forgone any compensation for their stories. Instead, their proceeds will be donated to First Book—a leading nonprofit that provides new books, learning materials, and other essentials to educators and organizations serving children in need. To further celebrate the launch of this book and both companies’ longstanding relationships with First Book, Penguin Random House has donated $100,000 to First Book, and Disney/Lucasfilm has donated 100,000 children’s books—valued at $1,000,000—to support First Book and their mission of providing equal access to quality education. Over the past sixteen years, Disney and Penguin Random House combined have donated more than eighty-eight million books to First Book.

An impressive, and highly entertaining, short story compilation. —Cinelinx
The stories are humorous, heartbreaking, and downright wacky. If you have a favorite Star Wars character, forget them. You’re going to have forty new favorite characters after reading this. —Comicsverse
An entertaining, multi-faceted way to revisit that galaxy far, far away. —Financial Times
The biggest joy of this collection is turning the page to a new story and realizing which character they'll be jumping to next. —New York Daily News
The Mashup You’ve Been Looking For. —Tordotcom

Nnedi Okorafor is an award–winning novelist of African-based science fiction, fantasy, and magical realism for both adults and younger readers. Born in the US to Nigerian immigrant parents, she is known for weaving African cultures into creative settings and memorable characters. Her children’s book Long Juju Man won the 2007–2008 Macmillan Writer’s Prize for Africa, and her adult novel Who Fears Death was a Tiptree Honor Book and has optioned for film by HBO. She is a full-time professor at the University at Buffalo, New York.

Sabaa Tahir grew up in California’s Mojave Desert at her family’s eighteen-room motel. There she spent her time devouring fantasy novels, raiding her brother’s comic book stash, and playing guitar badly. She began writing An Ember in the Ashes while working nights as a newspaper editor. She likes thunderous indie rock, garish socks, and all things nerd. Tahir currently lives in the San Francisco Bay Area with her family.

Renée Ahdieh is a graduate of the University of North Carolina at Chapel Hill. In her spare time, she likes to dance salsa and collect shoes. She is passionate about all kinds of curry, rescue dogs, and college basketball. She lives in Charlotte, North Carolina, with her husband and their tiny overlord of a dog.