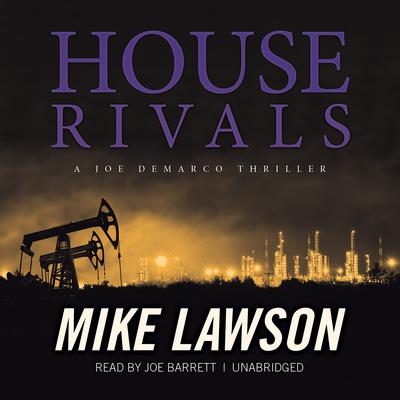 As a fixer for influential congressman John Mahoney in Washington, DC, Joe DeMarco has found himself in plenty of unexpected and dangerous situations. In House Rivals, DeMarco is taken further out of his element than ever before, sent to North Dakota to protect a passionate but naïve twenty-two-year-old blogger who has put herself in harm’s way.

The young woman is Sarah Johnson, whose grandfather saved Mahoney’s life in Vietnam. For the past two years, Sarah has been on a relentless crusade against a billionaire oil tycoon who has profited handsomely from the natural gas boom in the Dakotas—and who she believes has been bribing small-time politicians and judges to keep things in his favor. Though she has no hard evidence against the man, Sarah has been assaulted and received death threats for her meddling. DeMarco, given his years of experience bending the rules in DC, suspects that a middleman like himself is pulling strings for the tycoon. But as DeMarco tries to identify his adversaries, the situation turns unexpectedly violent, and DeMarco finds himself in a battle of wits against two ruthless problem solvers who will stop at nothing to win.

“Kudos to Mike Lawson for the consistently high quality of this series. Always a joy to read.” —Deadly Pleasures
“This tenth Joe DeMarco political thriller tackles the murky world of state and local politics with the series’ hallmark blend of danger and cynical wit…This is a solid thriller, both suspenseful and smart, much in the manner of the great Ross Thomas.” —Booklist
“Everything here, from the hard-case characters to the headlong pace, is professional-grade.” —Kirkus Reviews