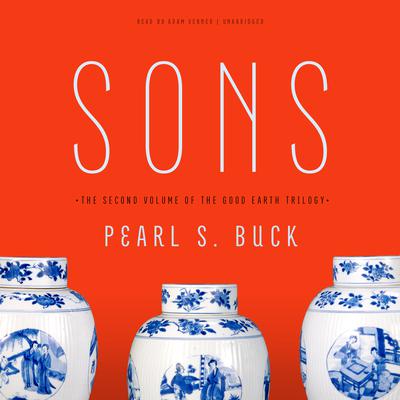 The House of Earth Trilogy: Book 2

The second installment in Pearl S. Buck’s acclaimed Good Earth trilogy: the powerful story of three brothers whose greed will bring their family to the brink of ruin

Sons begins where The Good Earth ended: revolution is sweeping through China. Wang Lung is on his deathbed in the house of his fathers, and his three sons stand ready to inherit his hard-won estate. One son has taken the family’s wealth for granted and become a landlord; another is a thriving merchant and moneylender; and the youngest, an ambitious general, is destined to be a leader in the country. Through all his life’s changes, Wang did not anticipate that each son would hunger to sell his beloved land for maximum profit.

At once a tribute to early Chinese fiction, a saga of family dissension, and a depiction of the clashes between old and new, Sons is a vivid and compelling masterwork of fiction.

“[With Sons] Buck has enriched her wide canvas.” —New York Times
“[Buck] did for the working people of twentieth-century China something of what Dickens had done for London’s nineteenth-century poor.” —Hilary Spurling, author of Pearl Buck in China

Pearl S. Buck (1892–1973), the daughter of missionaries, was born in West Virginia but spent most of her time until 1934 in China. She began writing while in China and published her first novel shortly after returning to the United States. Her novel The Good Earth was the bestselling fiction book in the United States in 1931 and 1932, and it won the Pulitzer Prize in 1932. In 1938 she became the first American woman to be awarded the Nobel Prize in Literature, “for her rich and truly epic descriptions of peasant life in China and for her biographical masterpieces.”