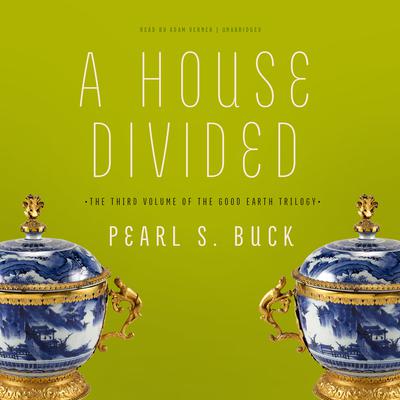 The House of Earth Trilogy: Book 3

The conclusion to Buck’s celebrated Good Earth trilogy: the story of a man’s return to a homeland embroiled in revolution

On the eve of a popular rebellion, the Chinese government starts to crack down in cities across the country. Fleeing the turmoil, Wang Yuan, the son of a famous general and grandson of the patriarch of The Good Earth, leaves for America to study agriculture. When he returns to China six years later, he encounters a nation still in the grip of violent uprisings. Unprepared for the social upheaval, Wang is torn by the tensions between old traditions and new ways, and by his formidable family, whose struggles he hopes to solve.

A reflective finale to Buck’s groundbreaking and bestselling trilogy, A House Divided is a rich and unforgettable portrait of a family—and a nation—in transition.

“A House Divided is built around China in revolution and the conflict between the young and old generations…A rich and illuminating book.” —New York Times

Pearl S. Buck (1892–1973), the daughter of missionaries, was born in West Virginia but spent most of her time until 1934 in China. She began writing while in China and published her first novel shortly after returning to the United States. Her novel The Good Earth was the bestselling fiction book in the United States in 1931 and 1932, and it won the Pulitzer Prize in 1932. In 1938 she became the first American woman to be awarded the Nobel Prize in Literature, “for her rich and truly epic descriptions of peasant life in China and for her biographical masterpieces.”