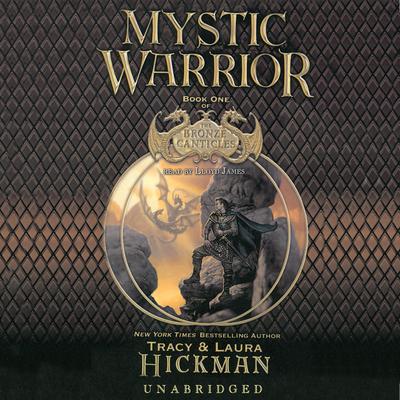 By Tracy Hickman and Laura Hickman
Read by Lloyd James

Thrice upon a time, there were three worlds of magic.

From a remarkable, bestselling husband-and-wife team comes the start of a monumental dragon-laden fantasy series. The Bronze Canticles is an expansive saga chronicling the world-altering changes that take place as three connected universes—the Human world, the Goblin world, and the Faery world—are slowly drawn together.

Book One, Mystic Warrior, centers on young Galen Arvad, a human whose magical powers have branded him a lunatic in the eyes of the community. When Galen is suddenly captured and imprisoned, his wife Berkita and friend, Cephas the dwarf, set off to rescue him from the yearly ritual that would sacrifice local “crazies” to the Dragon Priests. But the fate that awaits Galen may be far worse than even his own death.

“The scope, detail, meticulous planning, and weaving and winding storyline…are just breathtaking.” —R. A. Salvatore, New York Times bestselling author
“An exciting, adventure-filled read from two of the great storytellers and world builders of our time.” —Margaret Weis, New York Times bestselling author
“This emotionally intense novel’s meticulously crafted magical system and likable characters evoke an atmosphere both timely and timeless. While lively action sequences and rich descriptive passages provide plenty of excitement, mature examinations of politics and individual responsibility lend philosophical weight and emotional poignancy…A fine example of socially conscious and unpredictable imaginative fiction.” —Publishers Weekly (starred review)
“Fans of Hickman’s work should be extremely pleased with this audiobook. Lloyd James does a fantastic job performing, really embracing the epic fantasy and giving it an energy and depth on par with the finest narrators in the business…with Lloyd James’ first-rate narration, this is a winner for fans of epic fantasy.” —SFFAudio.com
“Lloyd James personifies his characters with imagination and style. With fairies and goblins and trolls, as well as humans, he has a wide range to work with. Whether the hint of some well-known public characters is intentional or merely in the mind of the listener, it adds an undertone of humor and energy to this adventure.” —AudioFile
“[James’] semi-voiced reading brings this intriguing fantasy adventure tale to life through his timing, his intonation, and his wide range of accents and voices.” —Kliatt

Tracy Hickman lives in St. George, Utah, and has been publishing game designs and stories for more than twenty-five years.

Laura Hickman lives in St. George, Utah, and has been publishing game designs and stories for more than twenty-five years.