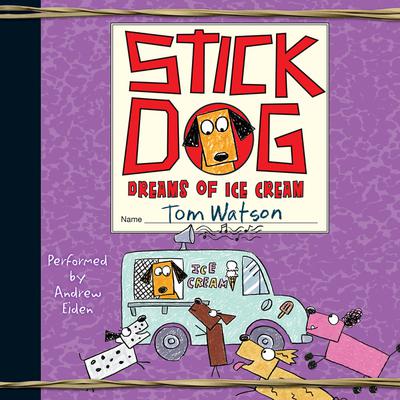 Stick Dog and his pals are back, but this time the temperature is rising and they're all feeling the heat. They need cold, cold ice cream on this hot, hot day!

It will take all of Stick Dog's smarts to guide his friends to a scrumptious ice-cream feast. They'll battle a water-attacking machine, discover rainbow puddles, and chase the strangest, loudest truck they've ever seen.

But there's a looming threat to their mission—Stick Dog gets spotted by a human. And the police are on his tail. If he's captured, Stick Dog may never see his friends again. If he escapes, it's ice cream for everyone.

With hilarious text, reluctant readers will eat this one up! Perfect for fans of such series as Dog Man, Big Nate, Timmy Failure, and Diary of a Wimpy Kid.

Other favorites in the series include Stick Dog Wants a Hot Dog, Stick Dog Chases a Pizza, and many more!

Tom Watson is the author of three popular children’s book series, Stick Dog, Stick Cat, and the Trouble at Table 5 series, as well as two stand-alone picture books. He is a former political speech writer who discovered that kids are way smarter than adults and that writing stories for children is a lot more fun.