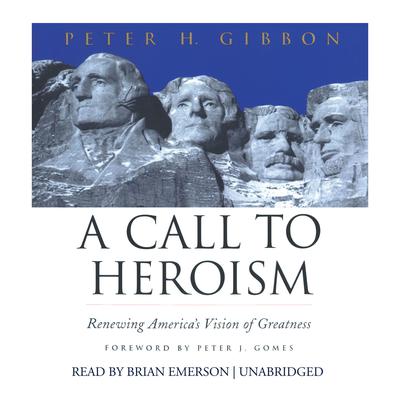 A Call to Heroism: Renewing America’s Vision of Greatness

A Christian Science Monitor Book of the Year for 2002

What do we look for in our heroes of today? And what are we to expect of heroes in our uncertain future? In this book, Gibbon traces the evolution of our collective vision of greatness from the age of our founders to today’s celebrity-obsessed media age.

Among history’s exemplary men and women who have sacrificed for causes greater than themselves he includes not only traditional civic heroes, such as George Washington, but also heroes of ideas and conscience: scientists, educators, religious leaders, and activists. Also discussed are monuments and artworks dedicated to heroes to examine what these memorials say about the America of their time and to us today. Gibbon concludes that, although our reverence for ideals may have eroded, we now have a unique opportunity to forge a new understanding of what it means to be a hero.

“A Call to Heroism is an engaging and provocative discussion of the role of the hero in American life. Peter Gibbon’s book should be lively fare for classrooms and boardrooms through the country.” —Arthur Schlesinger, Jr.
“This book is a delightful Grand Tour, taking us from war to sports to great literature. You will enjoy it.” —Washington Post
“Fascinating and inspiring…Gibbon’s book emphasizes the importance of guiding young people to more realistic definitions of hero…By encouraging a reexamination of the qualities twenty-first-century Americans emphasize, [Gibbon] quietly shows the rewards of recognizing individuals who stand for our higher self.” —Christian Science Monitor
“Very thought-provoking…A concise history of the hero in America and a realistic formula for determining who deserves the accolade…A worthy endeavor.” —Tampa Tribune
“Gibbon’s enthusiasm for restoring the notion of heroism is admirable.” —Publishers Weekly
“Gibbon’s plea for recognition of the ‘extraordinary achievement, courage, and greatness of soul’ embodied by heroes is in sync with the current climate.” —Booklist
“The heroes of today have different faces, and the word itself has a more precise meaning for all of us. Peter Gibbon’s book could not be more timely as we look around to identify those in our lives who are making up a new generation of heroes.” —New York State Governor George E. Pataki

Peter H. Gibbon is a research associate at the Harvard University Graduate School of Education. He has traveled across the nation speaking to general audiences, to state and national education associations, and to students at more than 150 schools in twenty states about heroism and heroic ideals for the twenty-first century.