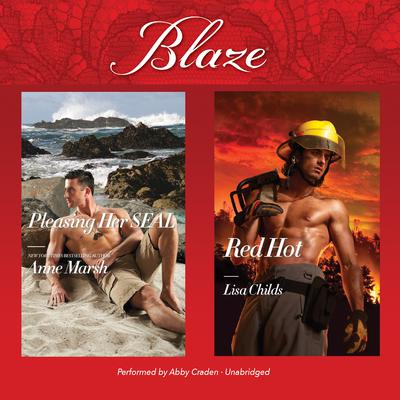 By Anne Marsh and Lisa Childs
Read by Abby Craden

Pleasing Her SEAL by Anne Marsh

MISSION: Remain undercover … even if it means going commando!

Wedding blogger Maddie Holmes is twelve times the bridesmaid and never the bride. Still, being on the sidelines of everyone else’s happy endings has its perks, like staying at the luxurious, decadent Fantasy Island. The resort isn’t just romantic—it’s filled with sinful temptations … like delicious hottie resort chef Mason Black. And Maddie can’t wait to take a bite!

There’s just a teeny problem with her plan. She has no idea that Mason is an undercover Navy SEAL who needs photographs Maddie took that put both his mission and her life at risk. Mason’s plan? Retrieve the pics and indulge in a few X-rated fantasies with the curvy redhead … and hope like hell that being between the sheets doesn’t blow his cover.

He’ll risk his life … just not his heart

Fiona O’Brien knows how to minimize risk … by never, ever falling for a guy in a hazardous job. And when her brother applies to become an elite Forest Service firefighter, Fiona hits the roof. She’ll do anything to keep him safe—even if it means using every sexy tool in her arsenal to seduce the one firefighter who can change her brother’s mind.

Hotshot Wyatt Andrews swore to avoid controlling women like Fiona. And he has no intention of intervening in her family business. Still, he can’t resist the fiery redhead with the deadly curves. Soon they’re engulfed in a blaze of lust that incinerates their self-control. They’re playing each other, but if they’re not careful they may both get burned.

“High stakes and intense emotions make this passionate read a sizzling addition to the Hotshot Heroes series.” —RT Book Reviews (4½ stars, Top Pick!) on Red Hot
“A playful adventure with lots of humor and a touch of suspense that features a strong heroine who isn’t afraid to go after her heart’s desire.” —RT Book Reviews (4 stars) on Pleasing Her SEAL

Anne Marsh escaped academia after ten years of graduate school and too many degrees and became a technical writer. When not planted firmly in front of the laptop translating “Engineer” into English, she enjoys gardening, running, and reading books curled up with her kids. The best part of writing romance for this New York Times bestselling author, however, is finally being able to answer the question, So, what do you do with a PhD in Slavic languages and literatures?

Lisa Childs read her first romance novel at age eleven, and ever since all she wanted to be was a romance writer. Now an award-winning, bestselling author of nearly fifty Harlequin novels, she is living the dream.