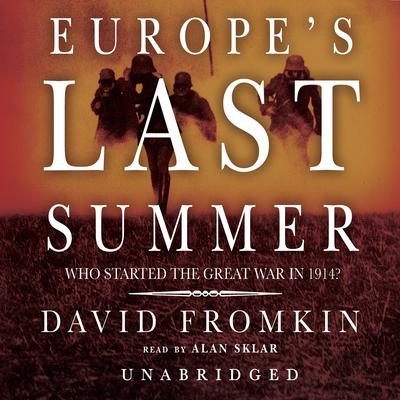 Europe’s Last Summer: Who Started the Great War in 1914?

The early summer of 1914 was the most glorious Europeans could remember. But, behind the scenes, the most destructive war the world had yet known was moving inexorably into being, a war that would continue to resonate into the twenty-first century.

The question of how the Great War of 1914 began has long vexed historians. In a gripping narrative, Fromkin shows that hostilities were started deliberately and that two wars were waged, one serving as pretext for the other.

Shedding light on such current issues as preventive war and terrorism, Fromkin provides detailed descriptions of the negotiations and incisive portraits of the diplomats, generals, and rulers as he reveals why diplomacy was destined to fail.

“The boldness of Fromkin’s argument is enough to warrant attention, but his fluidity of expression guarantees a large audience for this book.” —Booklist (starred review)
“Fromkin allies a direct, compulsively readable style with a daunting command of sources old and new, unrolling a complex skein of events with assurance and wit and dispatching numerous conventional wisdoms.” —Publishers Weekly
“Sklar’s thoroughly professional reading features impeccable timing and diction and a clear voice that is easy to listen to.” —Kliatt
“Alan Sklar pulls it off. He reads compellingly, in a middle American bass-baritone with highs and lows of expression, nicely enhancing the text.” —AudioFile