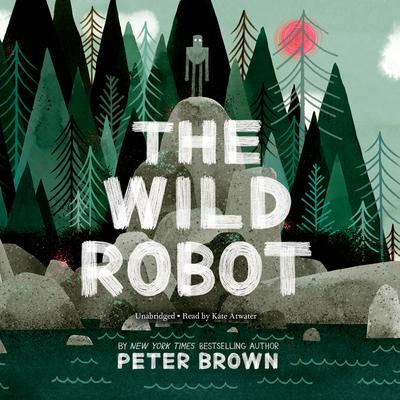 A 2016 Publishers Weekly Best Books of the Year Selection

Can a robot survive in the wilderness?


When robot Roz opens her eyes for the first time, she discovers that she is alone on a remote, wild island. She has no idea how she got there or what her purpose is--but she knows she needs to survive. After battling a fierce storm and escaping a vicious bear attack, she realizes that her only hope for survival is to adapt to her surroundings and learn from the island's unwelcoming animal inhabitants.

As Roz slowly befriends the animals, the island starts to feel like home--until, one day, the robot's mysterious past comes back to haunt her.


From bestselling and award-winning author and illustrator Peter Brown comes a heartwarming and action-packed novel about what happens when nature and technology collide.

“Brown has written a lively tale that is sure to engage young readers.” —New York Times
“There are fantastic audio versions…mixing wisdom and innocence in equal measure: The Wild Robot and its sequel, The Wild Robot Escapes, both by Peter Brown and read by Kate Atwater and Kathleen McInerney, respectively.” —New York Times Book Review (audio review)
“Roz may not feel emotions, but young readers certainly will as this tender, captivating tale unfolds.” —Washington Post
“Brown wisely eschews a happy ending in favor of an open-ended one that supports the tone of a story that’s simultaneously unsentimental and saturated with feeling.” —Publishers Weekly (starred review)
“This strong debut middle grade novel by the acclaimed picture book author/illustrator is a first purchase for most middle grade collections.” —School Library Journal (starred review)
“[A] tale of wilderness survival and friendship…Readers will take a shine to Roz, and an open ending leaves room for more robot adventures.” —Booklist (starred review)
Thought-provoking and charming.” —Kirkus Reviews (starred review)
“Roz is not easy to forget.” —Horn Book
“Narrator Kate Atwater maintains Roz’s robotic voice throughout the book, but as Roz slowly earns membership in the island’s animal community…her machinelike voice gains warmth and friendliness…The listener will…ponder the nature of humans, the implications of artificial intelligence, and the meaning of being wild. Winner of the AudioFile Earphones Award.” —AudioFile

Peter Brown is the author and illustrator of many bestselling children’s books, including Children Make Terrible Pets, The Curious Garden, and the Wild Robot series. He is the recipient of a Caldecott Honor, two E. B. White Read Aloud Awards, a Golden Kite Award, a New York Times Best Illustrated Children’s Book Award, and a Children’s Choice Award for Illustrator of the Year.