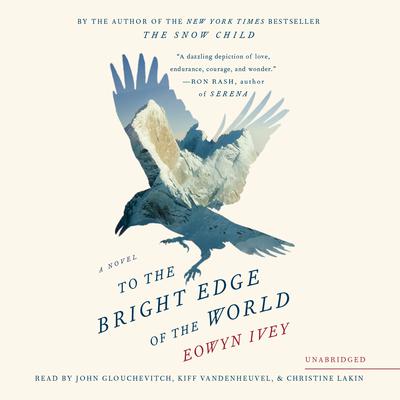 To the Bright Edge of the World: A Novel

Longlisted for the 2017 Carnegie Medal for Literature

A Library Journal Best Book of 2016

From the bestselling author of The Snow Child, a thrilling tale of historical adventure set in the Alaskan wilderness.

In the winter of 1885, Lieutenant Colonel Allen Forrester sets out with his men on an expedition into the newly acquired territory of Alaska. Their objective: to travel up the ferocious Wolverine River, mapping the interior and gathering information on the region’s potentially dangerous native tribes. With a young and newly pregnant wife at home, Forrester is anxious to complete the journey with all possible speed and return to her. But once the crew passes beyond the edge of the known world, there’s no telling what awaits them.

With gorgeous descriptions of the Alaskan wilds and a vivid cast of characters—including Forrester, his wife Sophie, a mysterious Eyak guide, and a Native American woman who joins the expedition—To the Bright Edge of the World is an epic tale of one of America’s last frontiers, combining myth, history, romance, and adventure.

“Ivey’s novel is a dazzling depiction of love, endurance, courage, and wonder.” —Ron Rash, New York Times bestselling author
“Powerful…Ivey is a gifted storyteller and a lyrical prose stylist.” —New York Times Book Review
“A novel with all of the fine details that make historical fiction such an adventure to read.” —Minneapolis Star Tribune
“An epic adventure story that seems heir to the tradition of Melville’s own sweeping and ambitious literary approach to the age-old struggle of humans versus nature…an absorbing and high-stakes read.” —Chicago Tribune
“Beautifully told…a page-turner, a fascinating story that is broad in its scope as it is compassionate in its message.” —Miami Herald
“[Ivey] fashions characters who come to warm and vivid life against her frozen Alaskan landscapes.” —Guardian (US edition)
“Raises the personal stakes and the emotional payoff to impressive new levels…a stunning and subtle performance…This is enchanted writing.” —Christian Science Monitor
“An 1880’s Alaskan adventure that really delivers…a rip-roaring frontier adventure.” —Business Insider
“The personal nature, the immediacy of the writing puts the reader in the heart of the story, allowing one to become a participant rather than a mere observer.” —Library Journal (starred review)
“[A] captivating historical novel…Read it for the vivid portrayal of Alaska’s rugged wilderness—and for the emotional power of Ivey’s first-rate storytelling.” —BookPage
“In this splendid adventure novel, Ivey captures Alaska’s beauty and brutality, not just preserving history but keeping it alive.” —Publishers Weekly
“An exceptionally well-turned adventure tale…Heartfelt, rip-snorting storytelling.” —Kirkus Reviews
“The story is original and compelling, well worth the listen.” —AudioFile

Eowyn Ivey is the author of To the Bright Edge of the World and The Snow Child, her debut novel. The Snow Child, was a finalist for the Pulitzer Prize and an international bestseller published in twenty-six languages. Ivey earned her BA in journalism and creative writing from Western Washington University and studied creative nonfiction at the University of Alaska. She is a founding member of 49 Writers, Alaska’s first statewide writing center, and lives in her native Alaska with her husband and two daughters.