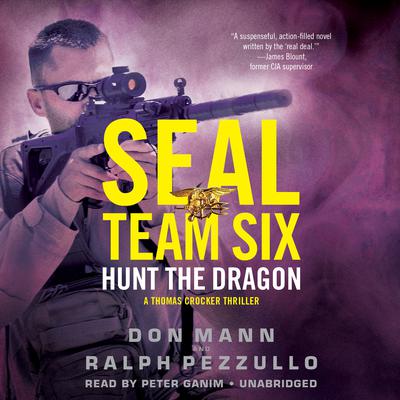 By Don Mann and Ralph Pezzullo
Read by Peter Ganim

Hackers from the North Korean government are one click away from obtaining black market nuclear weapons. Only the heroes of SEAL Team Six can stop them.

In Don Mann and Ralph Pezzullo’s newest novel, Captain Thomas Crocker and Mancini of SEAL Team Six’s Black Cell are in Las Vegas after conducting a training exercise in the desert with new members of the team. Lounging by the pool at Caesar’s Palace, they witness an argument between hotel security guards and three Asian men in corporate attire that quickly turns physical. Crocker and Mancini give chase and soon corner the businessmen, who claim to be Chinese diplomats under the protection of diplomatic immunity. Except the men don’t respond when the head of hotel security—Crocker’s old friend—addresses them in Chinese.

That night someone hacks into the Nevada Power Company system, and Las Vegas goes completely dark. The businessmen set their hotel suite on fire and escape amidst the chaos. When Crocker and the rest of his SEAL Team Six attempt to track them down, the squad finds itself in the middle of an international plot with dangerous geopolitical ramifications: a desperate scheme by an embattled North Korean government that combines cyber warfare with old-fashioned money laundering and the theft of black market nuclear weapons.

Don Mann, CWO3, USN, has for thirty years been associated with the Navy SEALS. Up until 1998 he was on active duty with SEAL Team Six. Since his retirement, he has deployed to the Middle East on numerous occasions in support of the war against terrorism. Many of the active duty SEALs on SEAL Team Six are the same guys he trained. Mann is the author of the national bestseller Inside SEAL Team Six. He lives in Miami Beach, Florida.