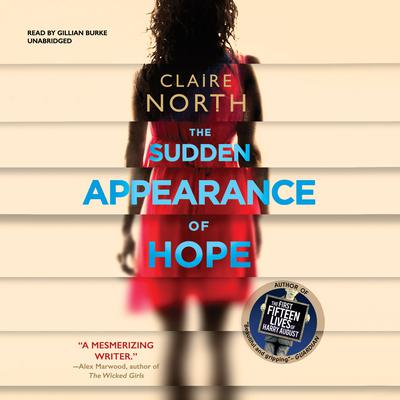 Finalist for the 2017 World Fantasy Award for Best Novel

The World Fantasy Award-winning thriller about a girl no one can remember, from the acclaimed author of The First Fifteen Lives of Harry August and 84K.

My name is Hope Arden, and you won't know who I am. But we've met before - a thousand times.
It started when I was sixteen years old. A father forgetting to drive me to school. A mother setting the table for three, not four. A friend who looks at me and sees a stranger.
No matter what I do, the words I say, the crimes I commit, you will never remember who I am.
That makes my life difficult. It also makes me dangerous.
The Sudden Appearance of Hope is a riveting and heartbreaking exploration of identity and existence, about a forgotten girl whose story will stay with you forever.
More by Claire North: The Gameshouse 84K The End of the Day The Sudden Appearance of Hope Touch The First Fifteen Lives of Harry August

Startlingly original —Independent (UK)
North isn't here to lecture you or rehash tired debates. Instead, she's produced something that feels at the same time absent and necessary: Smart, compelling fiction about this future that asks us to outsource ever-larger chunks of our selves to the cloud. —Tech Insider
This is a book which is incredibly compelling, and incredibly heartbreaking at times. I could not put it down. —The Forest of Books
[T]his is an inquiry into modern human existence. Philosophical questions are threaded through the electrifying plot. Even the protagonist's darkness alias is "why." Reminiscent of William Gibson's best work, North leads us into a brilliant world of elite but mindless humans, and shines a sharp light on what a rare gift it is to be able to think for oneself and what the consequences of it are. —RT Book Reviews
North has established a reputation for tense, dense, science fiction/fantasy-inflected thrillers that defy facile explanations... Simultaneously a tense conspiracy caper, a haunting meditation on loneliness and a brutally cynical examination of modern media... Well-paced, brilliant and balanced. —New York Times
Beautifully written, with a protagonist who is both tragic and heroic, the novel is remarkably powerful and deeply memorable, the latest in a string of terrific books from this newly emerged star in the genre-blending universe. —Booklist (starred review)
The experience of sitting with it, sinking into it, aching along with Hope as her loneliness shapes and breaks her, was wonderful, painful and moving. —NPR
“Gillian Burke’s performance is unforgettable. It’s smooth, polished, and oh so graceful. Her voice shifts with the action and adjusts to Hope’s emotions, which range from stoic to frustrated, amazed to angry…Burke’s fluid narration draws the listener into the chilling world of Perfection and Hope’s drive to destroy its ever-growing power. Burke’s performance is as addictive as the story itself. Winner of the AudioFile Earphones Award.” —AudioFile