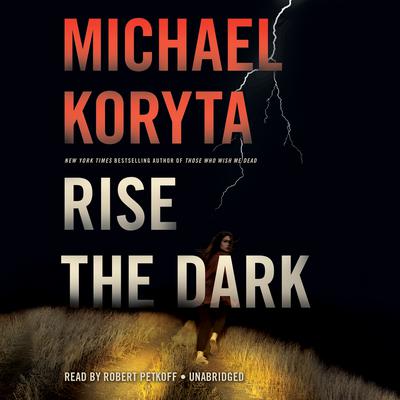 A Kirkus Reviews’ Best Books of 2016 Selection for Fiction

Mark Novak’s greatest mystery may be his own …

“I was asleep when my wife died,” Private Investigator Mark Novak tells us. His relentlessness as an investigator has been his professional calling card and curse, but he couldn’t bear to ever investigate what happened to his wife two years before—until now.

When he returns to the country road outside Cassadega, Florida, where his wife was shot, he uncovers disturbing leads that show how her murder might be connected to Novak’s own troubled youth in Montana.

Back in the mining towns of Montana he thought he’d left behind forever, he’ll face an adversary more frightening than he’s ever known, and a secret that has wended its way through his entire life: from the caverns beneath Indiana to the abandoned streets of a southern Gothic town to the darkest corners of the Northwest.

Rise the Dark is a mystery about evil and heroism, and what happens when the two are inextricably and tragically linked.

Absolutely breathtaking, nail-biting, and edge-of-your-seat. Michael Koryta is a master at maintaining suspense and a hell of a good writer. Those Who Wish Me Dead is one of the best chase-and-escape novels you'll read this year - or any other year. The pace never lets up. —Nelson DeMille, author of The Quest
Among his many gifts, Michael Koryta is a virtuoso in his use of outdoor settings... his thrillers present the great outdoors in their most frightening aspects. The book's atmospheric power and strong cast of supporting characters make Rise the Dark compelling from the get-go. —The Chicago Tribune
Welcome to Michael Koryta's latest nightmare.... Wonderfully eerie scenes... [and] distinct thrills. —Marilyn Stasio, New York Times
"Michael Koryta has done a fine job with Rise The Dark as he presents his most suspenseful novel since the terrific Those Who Wish Me Dead. At times his writing has toed the line between suspense and the supernatural. This is a thriller of the highest caliber that will dare readers to put it down before reaching the exciting climax. —BookReporter
Those Who Wish Me Dead is an absolutely thrilling read. I read most of it with my breath held, occasionally exhaling to ask myself, 'What will happen next?' I highly recommend it. —Kevin Powers, National Book Award Finalist and author of The Yellow Birds
Outstanding in every way, and a guaranteed thriller-of-the-year...Stephen King would be proud of the set up, Cormac McCarthy would be proud of the writing, and I would be proud of the action. Don't you dare miss it. —Lee Child, bestselling author of Never Go Back
“A superb thriller literally humming and buzzing with power and tension, given depth and resonance by Koryta’s fascination with pitting lone human emotion against a vast and forbidding landscape.” —Lee Child, New York Times bestselling author
As with his spellbinding 2014 effort, Those Who Wish Me Dead, Koryta employs the desolate Montana setting with such mastery and deep sense of mystery that it's a compelling character itself. And with an intriguing cody that reverberates with themes of family, myth, and psychic possibility, this new novel leaves us keenly anticipating the next installment of the Novak saga. Again proving himself one of today's top thriller writers, Koryta creates edgy suspense not with trickery but with characters who test the limits of their courage. —Kirkus Reviews - Starred Review
A frightening thriller about the holes in our infrastructure and the security protecting it. In this second Markus Novak novel, following 2015's Last Words, Koryta effectively combines a compelling premise, a villain who seems too smart to be stopped, and a revealing look at the hero's dysfunctional family. —Booklist
[With] a compelling narrative, relatable characters, and action scenes that play out like a blockbuster film, Koryta has written his best book to date. Highly recommended for fans of the author and readers of Dan Brown and Dennis Lehane. —Library Journal - starred review
“Rise the Dark is—excuse the pun—electrifying. Koryta delivers nonstop action in an all-too-plausible scenario, with that hint of the uncanny that’s become his trademark. The ending will have readers pounding his door for more.” —Joseph Finder, New York Times bestselling author
“Who needs jihadis when we’ve got our own homegrown terrorists? With a wild premise and fascinating background, Rise the Dark is a fast, gripping, satisfying thriller. For those who don’t know yet, Michael Koryta is building a hell of a shelf.” —Stewart O’Nan, New York Times bestselling author
"[A] magnificent action-and-adventure-packed novel…The exciting pace keeps escalating at breakneck speed until the electrifying conclusion.” —RT Book Reviews (4½ stars, Top Pick!)