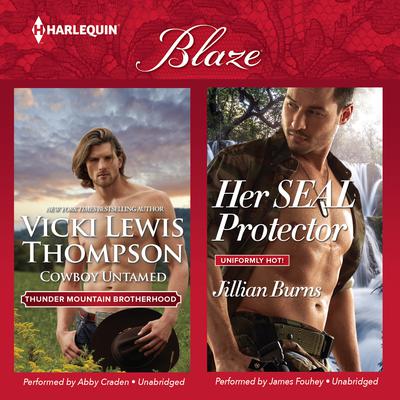 A cowboy…and so much more
Potter Sapphire Ferguson had one rule: no more artists. There have been too many disappointments and too many heartbreaks. That is, until she sees wildlife metal artist Grady Magee welding a sculpture of wolves, and Sapphire's self-control is completely incinerated. Whoa, Nellie. A cowboy with an artist's soul…and a hard, sexy body. How can she resist?
Sapphire tells herself it's just sex—incredibly and unbelievably intense sex—between two consenting adults. No love and no getting hurt. Except that Grady isn't just an artist. He was raised at Thunder Mountain Ranch, and he's all cowboy. He's playing for keeps…and he'll have to prove to Sapphire that he can have an artist's soul and a cowboy's heart.

Mission: Rescue the lush, curvy civilian. And definitely don't give in to temptation!

Even in her worst nightmare, Gabby Diaz never imagined a banking conference in Paraguay would end with her being kidnapped and ransomed—before being rescued by a hard-muscled Navy SEAL. Now, despite lingering worries, she's home and safe again…isn't she?

Someone has Gabby in their deadly sights, and she needs her hotter-than-hot SEAL's help. But despite Clay Bellamy's guarded Navy demeanor, his hunger for Gabby is hard to control. He tells himself it's just the "hero" thing, that they're worlds apart—until a sizzling kiss flips both their worlds upside down. Now Clay's mission has been compromised in the wickedest way imaginable…

“Everything, from the action, the romance, and Gabby and Clay individually will keep your attention, making you glad that you gave Her SEAL Protector a chance.” —RT Book Reviews (4 stars) on Her SEAL Protector

Vicki Lewis Thompson is the bestselling author of over one hundred novels, including the Sons of Chance series, the Babes on Brooms series, Thunder Mountain Brotherhood, and the Hex series, among others, along with dozens of stand-alone novels. She is the recipient of Romance Writers of America’s Nora Roberts Lifetime Achievement Award.

Jillian Burns lives in Texas with her supportive husband, three kids, and a sweet golden retriever. She thinks her emotional nature—sometimes referred to as moodiness by those closest to her—has found the perfect outlet in writing stories filled with passion and romance. Jillian loves reading romance novels and believes they have the power to change lives with their message of eternal love and hope.