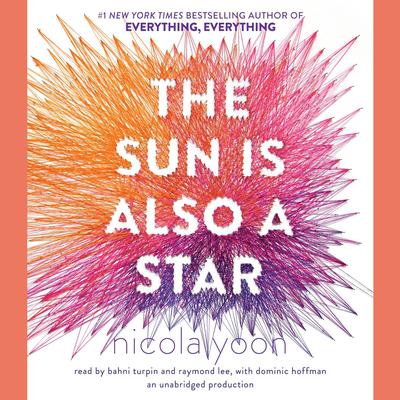 The Sun Is Also a Star

By Nicola Yoon
Read by Bahni Turpin  and Raymond Lee , with Dominic Hoffman

An Entertainment Weekly Best Book of 2016

Finalist for the 2016 National Book Award

A Publishers Weekly Best Book of 2016

An Amazon Best Book of the Month for November 2016

A Buzzfeed Best Books of the Year Selection

Now a major motion picture starring Yara Shahidi and Charles Melton! The #1 New York Times bestseller and National Book Award Finalist from the bestselling author of Everything, Everything will have you falling in love with Natasha and Daniel as they fall in love with each other.

Natasha: I’m a girl who believes in science and facts. Not fate. Not destiny. Or dreams that will never come true. I’m definitely not the kind of girl who meets a cute boy on a crowded New York City street and falls in love with him. Not when my family is twelve hours away from being deported to Jamaica. Falling in love with him won’t be my story.

Daniel: I’ve always been the good son, the good student, living up to my parents’ high expectations. Never the poet. Or the dreamer. But when I see her, I forget about all that. Something about Natasha makes me think that fate has something much more extraordinary in store—for both of us.

The Universe: Every moment in our lives has brought us to this single moment. A million futures lie before us. Which one will come true?

"A book that is very much about the many factors that affect falling in love, as much as it is about the very act itself . . . fans of Yoon’s first novel, Everything Everything, will find much to love—if not, more—in what is easily an even stronger follow up." —Entertainment Weekly

"Transcends the limits of YA as a human story about falling in love and seeking out our futures." —POPSUGAR.com

“Turpin and Lee both give award-worthy performances. Both completely inhabit their roles in an absolutely natural and authentic way…[and] are deft with accents, too…The voices of the characters will ring in listeners’ minds long after the book is completed.” —Publishers Weekly (starred audio review)
“This trio of narrators turns the alternating voices in this story into a terrific audio. Bahni Turpin…[and Raymond] Lee convincingly portray a building relationship that begins with a rebuff but by day’s end turns to love, and finally to heartbreak. Periodically, Dominic Hoffman interjects short commentary from other characters. His wide range of accents and tones portrays aspects of many characters in the past, present, and even the future. Winner of AudioFile Earphones Award.” —AudioFile
“With appeal to cynics and romantics alike, this profound exploration of life and love tempers harsh realities with the beauty of hope in a way that is both deeply moving and satisfying.” —Kirkus Reviews (starred review)
"An exhilarating, hopeful novel." —Shelf Awareness (starred review)
“Moving and suspenseful.” —Publishers Weekly (starred review)
“A love story that is smart without being cynical, heartwarming without being cloying, and schmaltzy in all the best ways.” —Bulletin of the Center for Children’s Books (starred review)
“Lyrical and sweeping, full of hope, heartbreak, fate…and the universal beating of the human heart.” —Booklist (starred review)
“Fresh and compelling.” —Horn Book Guide (starred review)

Nicola Yoon is a #1 New York Times bestselling author. She grew up in Jamaica and Brooklyn and currently resides in Los Angeles with her husband and daughter. She’s also a hopeless romantic who firmly believes that you can fall in love in an instant and that it can last forever.