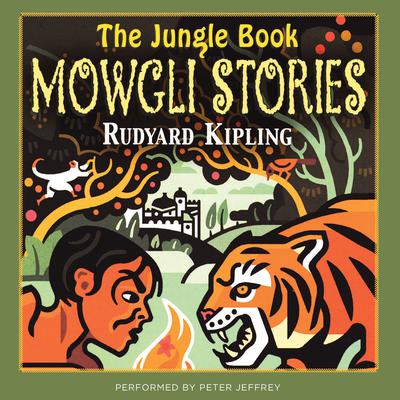 The Jungle Book: The Mowgli Stories

Peter Jeffrey reads three of Rudyard Kipling's original classic short stories. Abandoned in the Indian jungle and rescued by a wolf pack, the man-cub Mowgli is educated in the ways of the jungle by Akela the Wolf, Baloo the Bear, Bagheera the Black Panther and Kaa the big Rock Python. They teach him to hunt and protect him from Shere Khan, the ever-present Bengal Tiger. As Mowgli grows up, the powers of pack leader Akela wane and Shere Khan persuades the younger wolves to attack the man-cub. However, Mowgli has been told by Bagheera to learn the secret of the Red Flower from the nearby man village, which he can use to protect himself from the tiger. Meanwhile, Shere Khan isn't the only animal with designs on Mowgli. The monkeys want him for their leader, and will even resort to kidnapping him! Includes three complete and unabridged stories: 'Mowgli’s Brothers', 'Kaa's Hunting' and 'Tiger! Tiger!'. This recording was previously released on cassette as 'Mowgli Stories'.