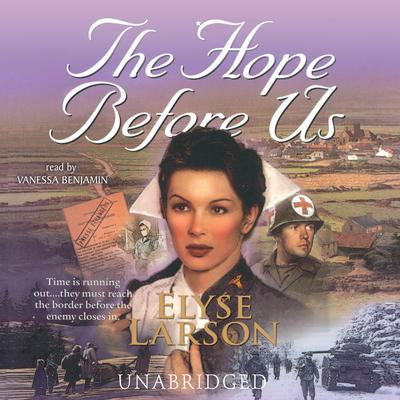 The Hope Before Us

The Women of Valor Series: Book 3

Contending valiantly against the Nazi threat in war-torn Europe, two sisters unite to thwart a sinister plan, in this third book in Elyse Larson’s Women of Valor series.

When Marge Emerson uncovers a diabolical Nazi plot she is secretly reassigned to a medical post in France. There she meets a conscientious objector whose outspoken belief in God challenges her own fragile faith. When David shares his desire to return to Europe after the war and build an orphanage for Germany’s homeless children, Marge is drawn to this selfless, compassionate man. Meanwhile, Marge’s sister, Em, a war correspondent, is recruited for intelligence work by an American secret service agency and quickly becomes involved in an intricate web of espionage. When Marge and Em are unexpectedly reunited in France, they attempt a daring rescue.

“Elyse Larson has delivered another winning episode in inspirational fiction.” —Historical Novels Review
“After reading this book, I look forward to reading the previous two books and wish there could be additional. So much more could still be told.” —Historical Fiction Review
“An insightful and unforgettable story of the lives of heroic women who served in the front lines during WWII.” —Rendezvous
“Well-researched and interesting, with believable characterizations and espionage…Readers will enjoy this conclusion to the Women of Valor series.” —RT Book Reviews

Elyse Larson is an author, photographer, and writing instructor who has several published novels. She and her husband live in Gresham, Oregon. They have three children and eleven grandchildren.