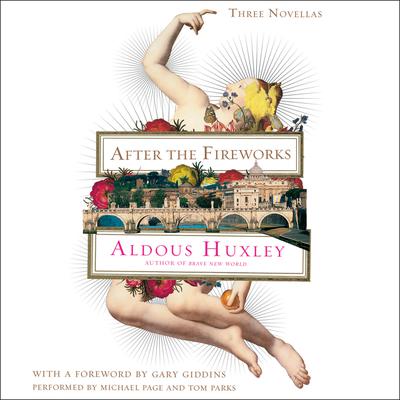 After the Fireworks: Three Novellas

From one of the greatest writers of the twentieth century, Aldous Huxley, comes his great novella, set in Rome, about a writer’s affair with a mysterious young fan—now back in print for the first time in the U.S. in more than seventy years and also featuring two other acclaimed short works, plus an original introduction from noted critic Gary Giddins.

“The psychology of the two individuals is shrewdly mastered.... After the Fireworks displays on Huxley’s part a rare but genuine if elusive sympathy as well as a sound perception of human shortcomings.”—New York Times

In After the Fireworks, three of Aldous Huxley’s lost classic pieces of short fiction are collected for the first time. In the title novella, Rome is the stunning backdrop where internationally famous novelist Miles Fanning sets out on a walk down Via Condotti toward the Spanish Steps when he encounters the mysterious Pamela Tarn—a beautiful young American admirer of his work who shares a name, as well as conspicuous personality traits, with a character from his most celebrated book. Though there is a considerable age difference between them and they come from different worlds, both are soon irresistibly drawn into a dangerous affair which has unforeseen consequences. First published one year before he wrote his classic Brave New World and now back in print for the first time in seventy five years, After the Fireworks is Aldous Huxley at the height of his powers. Featuring an original introduction by National Book Critics Circle Award-winner Gary Giddins, this new collection also includes Uncle Spencer (1924), the story of an aging World War I veteran’s quest for the lost love he met in a prison during the war, and Two or Three Graces (1926), the tale of a passionate and destructive writer’s abusive relationship with an impressionable, bourgeois housewife.

“After the Fireworks is a major work and a turning point for Huxley, leading directly to Brave New World.” —Gary Giddins, National Book Critics Circle Award–winning author
“The psychology of the two individuals is shrewdly mastered…After the Fireworks displays on Huxley’s part a rare but genuine if elusive sympathy as well as a sound perception of human shortcomings.” —New York Times

Aldous Leonard Huxley (1894–1963) was an English poet, novelist, dramatist, essayist, and humanist philosopher. He attended Eton and Oxford and briefly taught at Eton before devoting himself solely to writing. His fifth novel, Brave New World, is one of the most read books in literary history.

Gary Giddins was a long-time columnist for the Village Voice and is a preeminent jazz critic who received the 1998 National Book Critics Circle Award, the Ralph J. Gleason Music Book Award, and the Bell Atlantic Award for Visions of Jazz: The First Century. His other books include Bing Crosby: A Pocketful of Dreams—The Early Years, 1903–1940, which won the Ralph J. Gleason Music Book Award and the ARSC Award for Excellence in Historical Sound Research; Weatherbird: Jazz at the Dawn of Its Second Century; Faces in the Crowd; Natural Selection; and biographies of Louis Armstrong and Charlie Parker. He has won an unparalleled six ASCAP–Deems Taylor Awards, a Guggenheim Fellowship, and a Peabody Award in Broadcasting.