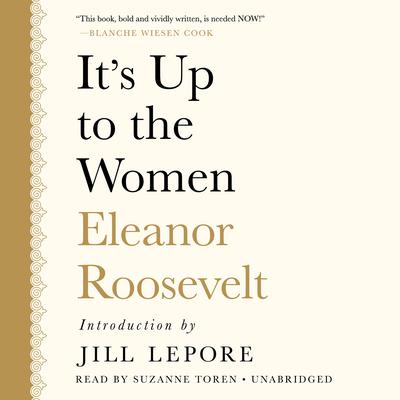 It’s up to the Women

Written at the height of the Great Depression, It’s up to the Women is Eleanor Roosevelt’s advice to women of all ages on every aspect of life. During a time of extreme hardship, she called on women particularly to do their part: cutting costs where needed, spending reasonably, and taking a personal responsibility to keep the economy going. She wrote, “Women, whether subtly or vociferously, have always been a tremendous power in the destiny of the world and with so many of them now holding important positions and receiving recognition and earning the respect of the men as well as the members of their own sex, it seems more than ever that in this crisis, ‘It’s Up to the Women!’”

Roosevelt was among the earliest and most influential people of the time to compile such a wide-ranging treatment of the roles women should take in both private and public life. Her opinions about women’s equality, civil rights, and a higher standard of education in the United States were ahead of her time. She argued for:

She also commented on the stark condition changes related to the Great Depression—homelessness, hunger, and alterations in the social order within communities and within families. Within this context, she calls upon the women to lead with her timely advice.

Although Roosevelt was still within her first year as First Lady of the United States when she wrote this book, she had already rewritten the role with her active participation politics, speaking tours around the country, and her participation in press conferences. In this book, she showed a firm grasp of what was going on in the lives of the American women and of the role women could and should fulfill in the life of the nation.

Anna Eleanor Roosevelt (1884–1962) was the wife of Franklin Delano Roosevelt and the mother their six children. She was an American politician, diplomat, and activist. She was the longest-serving First Lady of the United States, holding the post from March 1933 to April 1945. She made Gallup's list of “People that Americans Most Widely Admired in the 20th Century,” and Time's “The 25 Most Powerful Women of the Past Century.” She also served as delegate to the United Nations General Assembly, representative to the Commission on Human Rights under Harry S. Truman, and chairwoman of the Presidential Commission on the Status of Women under John F. Kennedy.