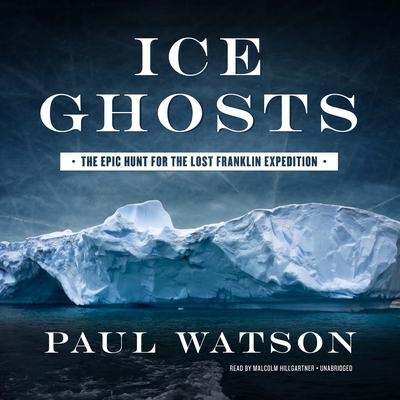 Ice Ghosts: The Epic Hunt for the Lost Franklin Expedition

Ice Ghosts weaves together the epic story of the Lost Franklin Expedition of 1845―whose two ships and crew of 129 were lost to the Arctic ice―with the modern tale of the scientists, divers, and local Inuit behind the incredible discovery of the flagship’s wreck in 2014.

Paul Watson, a Pulitzer Prize–winning journalist who was on the icebreaker that led the discovery expedition, tells a fast-paced historical adventure story: Sir John Franklin and the crew of the HMS Erebus and Terror setting off in search of the fabled Northwest Passage, the hazards they encountered, the reasons they were forced to abandon ship hundreds of miles from the nearest outpost of Western civilization, and the decades of searching that turned up only rumors of cannibalism and a few scattered papers and bones―until a combination of faith in Inuit lore and the latest science yielded a discovery for the ages.

“Narrator Malcolm Hillgartner has a rich voice and a keen ability to evoke an atmosphere of endless winter, deprivation, and mystery. He also rolls through the Inuit names and places without hesitation…Watson is also sympathetic to Franklin’s wife Jane’s famous intensity and grit, and Hillgartner faithfully renders her unusual viewpoint.” —AudioFile
“Hillgartner provides a crisp and authoritative reading. He lures listeners into this danger-filled adventure and the obsessive search in a smoky baritone that matches the bleak landscape and outcome of this ill-fated voyage of discovery. Information from Inuit oral history figures prominently, and Hillgartner fluently pronounces Inuit names and phrases. His lively reading calls attention to the interesting personalities and historical details that should intrigue fans of true adventure stories." —Booklist (audio review)
“The notable originality of Ice Ghosts lies in the fact that it brings the story right up-to-date, covering not only the discovery of the Erebus in 2014 but also the discovery of the Terror, about forty miles to the north, in 2016…A great story…quick, enjoyable, and…gripping reading.” —New York Times Book Review
“[A] thrilling tale of science’s hunt to solve one of naval history’s greatest riddles…[Watson’s] intimate familiarity with key players and places gives the reader an insider’s view of the operations.” —Discover
“Fascinating.” —Dallas Morning News
“A splendid achievement.” — Globe and Mail (Toronto)
“An incredible yarn.” —Boston Globe
“Intriguing…A keen, entertaining chronicle of the various attempts to locate a sensationally doomed expedition.” —Kirkus Reviews (starred review)
“Watson’s meticulously researched tale finely weaves together the many voices and experiences of those who sought Franklin’s long-missing ships.” —Publishers Weekly
“Riveting…An engrossing chronicle of a legendary doomed naval voyage and the nearly two-hundred-year effort to bring the Franklin expedition to a close.” —Booklist

Paul Watson is the author of Where War Lives and the recipient of the Pulitzer Prize, the National Headliner Award, the George Polk Award, and the Robert Capa Gold Medal.