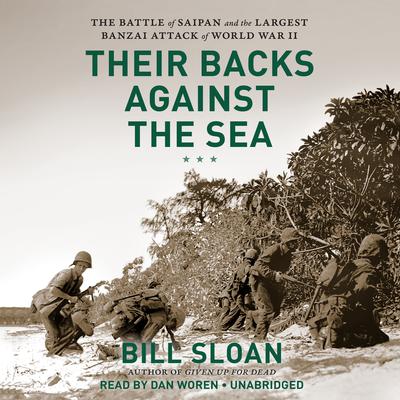 Their Backs against the Sea: The Battle of Saipan and the Greatest Banzai Attack of World War II

In the midst of the largest banzai attack of the war, US Army Lt. Col. William O'Brien, grievously wounded and out of ammunition, grabbed a sabre from a fallen Japanese soldier and flailed away at a small army of assailants, screaming to his men, "Don't give them a damn inch!" When his body was recovered the next day, thirty dead enemies were piled around him.

The Battle of Saipan lasted twenty-five hellish days in the summer of 1944, and the stakes couldn't have been higher. If Japan lost possession of the island, all hope for victory would be lost. For the Americans, its capture would result in secure air bases for the new B-29s that would put them within striking distance of the Japanese homeland. The outcome of the war in the Pacific lay in the balance.

In this gritty, vivid narrative, award-winning author Bill Sloan fuses fresh interviews, oral and unit histories, and unpublished accounts to describe one of the war's bloodiest and most overlooked battles of the Pacific theater. Combining grunt's-view grit with big picture panorama (and one of the ugliest inter-service controversies of the war), Their Backs against the Sea is the definitive dramatic story of this epic battle--and an inspiring chronicle of some of the greatest acts of valor in American military history.

Bill Sloan is an award-winning freelance journalist and the author of more than a dozen books, the most recent being Brotherhood of Heroes: The Marines at Peleliu, 1944—The Bloodiest Battle of the Pacific War and Given Up for Dead: America’s Heroic Stand at Wake Island. During his ten years as an investigative reporter and feature writer for the Dallas Times Herald, he covered many of the major events and personalities of the second half of the twentieth century and was nominated for a Pulitzer Prize. He lives in Dallas, Texas.