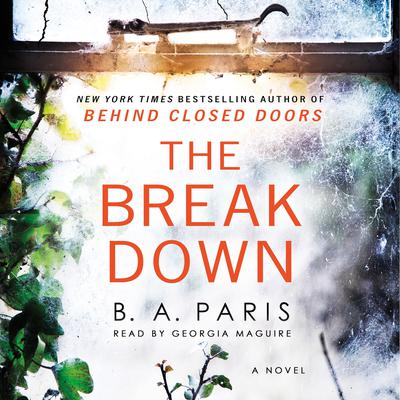 The Breakdown: A Novel

By B. A. Paris
Read by Georgia Maguire

A Bustle Pick of Most Anticipated Thrillers of 2017

Among longlisted titles for Barnes and Noble Best New Books of the Year, 2017

"[Georgia Maguire's] overall narration is calm and elegant but emotional and alarming during the horrific moments Grace experiences." - AudioFile Magazine on Behind Closed Doors. Named One of the Most Anticipated Thriller Novels Of 2017 by Bustle! THE NEWEST PROPULSIVE AUDIOBOOK FROM THE AUTHOR OF NEW YORK TIMES AND USA TODAY INSTANT BESTSELLER, BEHIND CLOSED DOORS. If you can’t trust yourself, who can you trust? Cass is having a hard time since the night she saw the car in the woods, on the winding rural road, in the middle of a downpour, with the woman sitting inside—the woman who was killed. She’s been trying to put the crime out of her mind; what could she have done, really? It’s a dangerous road to be on in the middle of a storm. Her husband would be furious if he knew she’d broken her promise not to take that shortcut home. And she probably would only have been hurt herself if she’d stopped. But since then, she’s been forgetting every little thing: where she left the car, if she took her pills, the alarm code, why she ordered a pram when she doesn’t have a baby. The only thing she can’t forget is that woman, the woman she might have saved, and the terrible nagging guilt. Or the silent calls she’s receiving, or the feeling that someone’s watching her… You won't be able to hit pause on B. A. Paris's The Breakdown, the next chilling audiobook from the bestselling author of Behind Closed Doors.

“Narrator Georgia Maguire’s soft British accent is an absolute listening pleasure…[A] skillful delivery and beguiling voice.” —AudioFile
"We loved what narrator Georgia Maguire did with Paris's Behind Closed Doors." AudioFile, Editors' Pick —
"Narrator Georgia Maguire's soft British accent is an absolute listening pleasure. ...Questions are eventually answered, and the mystery resolved, but it is the texture and tension provided by Maguire's skillful delivery and beguiling voice that make this a successful audio offering. —AudioFile
“A story with a ratcheting sense of unease―a tale of friendship and love, sanity and the terrible unravelling of it.” —USA Today
“This riveting psychological thriller pulls readers into an engrossing narrative in which every character is suspect. With its well-formed protagonists, snappy, authentic dialog, and clever and twisty plot, this is one not to miss.” —Library Journal (starred review)
“This psychological thriller is even harder to put down than Paris’ 2016 best-seller debut Behind Closed Doors; schedule reading time accordingly…With two in a row, Paris moves directly to the thriller A-list.” —Booklist (starred review)

B. A. Paris is the New York Times bestselling author of Bring Me Back, Behind Closed Doors, and The Breakdown, among other books.