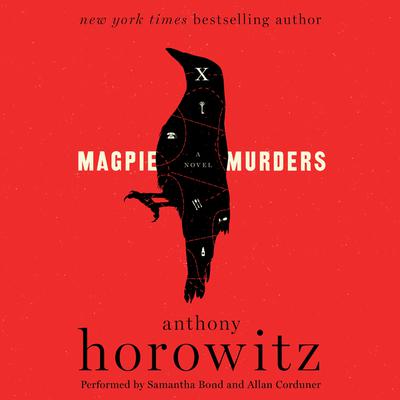 By Anthony Horowitz
Read by Samantha Bond  and Allan Corduner

Winner of the Macavity Award

Finalist for the 2018 Anthony Award for Best Novel

A BookRiot Pick of 7 Terrific Audiobooks with Theatrical Narrators

An Esquire Magazine Best Book of the Year

A 2017 LibraryReads Favorites of the Favorites selection

"Magpie Murders is a double puzzle for puzzle fans, who don’t often get the classicism they want from contemporary thrillers." --Janet Maslin, The New York Times

When editor Susan Ryeland is given the manuscript of Alan Conway’s latest novel, she has no reason to think it will be much different from any of his others. After working with the bestselling crime writer for years, she’s intimately familiar with his detective, Atticus Pünd, who solves mysteries disturbing sleepy English villages. An homage to queens of classic British crime such as Agatha Christie and Dorothy Sayers, Alan’s traditional formula has proved hugely successful. So successful that Susan must continue to put up with his troubling behavior if she wants to keep her job.

Conway’s latest tale has Atticus Pünd investigating a murder at Pye Hall, a local manor house. Yes, there are dead bodies and a host of intriguing suspects, but the more Susan reads, the more she’s convinced that there is another story hidden in the pages of the manuscript: one of real-life jealousy, greed, ruthless ambition, and murder.

Masterful, clever, and relentlessly suspenseful, Magpie Murders is a deviously dark take on vintage English crime fiction in which the listener becomes the detective.

“Samantha Bond begins enticingly with her husky vibrato and fully realized performance as a contemporary book editor who’s been given a murder-mystery manuscript. Soon, we’re in the midst of that book, set in 1955 and performed by Allan Corduner with a delightful bow toward the storytellers of old…Winner of the AudioFile Earphones Award.” —AudioFile
“Narrator Samantha Bond captures all of editor Susan Ryeland’s curiosity and annoyance as she chases after clues—on and off the page…Reading the manuscript itself, narrator Allan Corduner subtly uses intonation and tone to evoke the German Pünd and a motley group of English villagers in Horowitz’s homage to classic British detective fiction.” —Library Journal (audio review)
“Doubly devilish.” —People
“The thinking mystery fan’s ideal summer thriller.” —Times
"Magpie Murders is a double puzzle for puzzle fans, who don’t often get the classicism they want from contemporary thrillers.” —New York Times
“A brilliant pastiche of the English village mystery and a hugely enjoyable tale of avarice and skullduggery in the world of publishing.” —Irish Times
"[A] fun-house mirror of a novel sets a vintage ‘cozy’ mystery inside a modern frame.” —Wall Street Journal
“An ingenious whodunit within a whodunit, a metamystery with Agatha Christie roots.” —O, The Oprah Magazine
“A stylish, multilayered thriller, playful, ingenious, and wonderfully entertaining.” —Sunday Mirror (London)
“A treat for fans of golden-age mysteries…[A] tour de force…Horowitz throws in several wicked twists…Highly satisfying.” —Publishers Weekly (starred review)

Anthony Horowitz is the author of acclaimed mysteries and the bestselling teen spy series, Alex Rider. He has written two highly acclaimed Sherlock Holmes novels, The House of Silk and Moriarty; a James Bond novel, Trigger Mortis; and Magpie Murders, which was a New York Times and London Sunday Times bestseller. He is also responsible for creating and writing some of the United Kingdom’s most loved and successful television series, including Midsomer Murders and Foyle’s War.