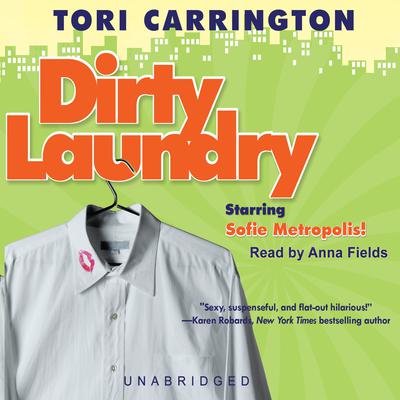 Winner of the 2006RIO Award of Excellence for Favorite Mystery

Sofie Metropolis is the newest PI on the mean streets of Astoria, Queens. She’s known for her trademark frappés and her itchy trigger finger.

Uncle Tolly was acting odd right before he disappeared. The proof? The brand-new Mercedes Tolly just bought—and the business’ books, which show that Uncle Tolly was laundering more than just clothes. Which is where the mob comes in, in the darkly handsome figure of Tony DiPiazza. Tony’s very taken with Sofie. Too bad she won’t back off the money laundering and kidnapping—or is it murder?—investigation. Too bad she’s too busy to notice the men in her life because she’s being attacked by a malevolent dry-cleaning bag, bailing Aglaia out of jail, and spying on her own father. Sofie’s quest for the truth gets her into hot water—and a pair of cement overshoes. Not her best look.

“Carrington depicts Sofie’s world with the nutty sweetness of baklava. With the focus on fun rather than blood, this chick-lite mystery further develops Sophie’s relationship with Jake Porter, the handy but possibly dangerous Aussie bounty hunter, who adds just the right amount of delectable sexual tension to this crime confection.” —Publishers Weekly
“This fast-paced book captures the colorful Greek community of Astoria, where Sofie navigates between the expectations of her Greek upbringing and the desires of her heart to be an independent and strong woman.” —Greek Circle magazine
“So you say that your Stephanie Plum novels aren’t coming fast enough? Well, this saucy plum of a PI will do just fine in between those. You’re going to love Dirty Laundry.” —Queens Tribune
“If you’re thinking Stephanie Plum in My Big Fat Greek Wedding, you’re not far off.” —Mystery Scene
“Snappy dialogue and offbeat characters ensure a great time!” —Romantic Times

Tori Carrington is the pen name of Lori and Tony Karayianni, a husband-and-wife writing team who have published more than twenty-five novels. They are recipients of the Romantic Times Reviewers’ Choice Award and have been nominated for the RITA Award. They live in Toledo, Ohio.