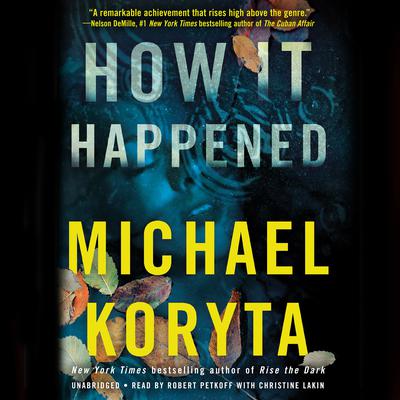 By Michael Koryta
Read by Robert Petkoff  and Christine Lakin

An O Magazine Pick of Best Reads of Summer

One of Kirkus Reviews’ Best Books of 2018 in Fiction

“And that is how it happened. Can we stop now?”

Kimberly Crepeaux is no good, a notorious jailhouse snitch, teen mother, and heroin addict whose petty crimes are well-known to the rural Maine community where she lives. So when she confesses to her role in the brutal murders of Jackie Pelletier and Ian Kelly, the daughter of a well-known local family and her sweetheart, the locals have little reason to believe her story.

Not Rob Barrett, the FBI investigator and interrogator specializing in telling a true confession from a falsehood. He’s been circling Kimberly and her conspirators for months, waiting for the right avenue to the truth, and has finally found it. He knows, as strongly as he’s known anything, that Kimberly’s story—a grisly, harrowing story of a hit and run fueled by dope and cheap beer that becomes a brutal stabbing in cold blood—is how it happened. But one thing remains elusive: Where are Jackie and Ian’s bodies?

After Barrett stakes his name and reputation on the truth of Kimberly’s confession, only to have the bodies turn up 200 miles from where she said they’d be, shot in the back and covered in a different suspect’s DNA, the case is quickly closed and Barrett forcibly reassigned. But for Howard Pelletier, the tragedy of his daughter’s murder cannot be so tidily swept away. And for Barrett, whose career may already be over, the chance to help a grieving father may be the only one he has left.

How It Happened is a frightening, tension-filled ride into the dark heart of rural American from a writer Stephen King has called “a master” and the New York Times has deemed “impossible to resist.”

“One hell of a murder mystery…The reader can’t put the book down until the last layer of the onion is peeled away to reveal the truth at the core of this gripping tale.” —Nelson DeMille, #1 New York Times bestselling author
“This gripping and absorbing story…could only be penned by Michael Koryta, whose sense of place and insight into the human experience are unsurpassed.” —Sandra Brown, #1 New York Times bestselling author
“Koryta drew on his experience as a private eye to craft this harrowing suspense novel set in Maine.” —O, The Oprah Magazine
“Where are the bodies? That’s the pertinent question posed by Michael Koryta in his cool and cunning novel How It Happened, which is loosely based, he has said, on a murder he covered as a young reporter in Indiana. Perhaps because of the personal angle—or just because Koryta is such a skilled writer—the story feels like the real deal.” —New York Times
“[An] ingenious new thriller…Koryta’s plotting is sure-footed, and the secrets he discloses, one by one, at the novel’s end are both surprising and plausible…A book the reader won’t soon forget.” —Washington Post
“This is…flawless, unpredictable storytelling streaked with his usual dark undercurrents. Crime fiction doesn’t get any more enjoyable.” —Kirkus Reviews (starred review)
“With this searing look at an investigator’s obsessive efforts to close a case that has reawakened childhood demons, bestseller Koryta has produced his most powerful novel in years…[Kory] has few peers in combining murder mysteries with psychological puzzles.” —Publishers Weekly (starred review)
“Feaders who enjoy rogue investigators as protagonists and devotees of murder mysteries will enjoy this enthralling tale.” —Library Journal (starred review)
“Barrett’s rediscovered lost love, Liz Street, is a keeper. Koryta excels at action set in remote places, and fans of William Kent Krueger and C. J. Box will enjoy this one." —Booklist