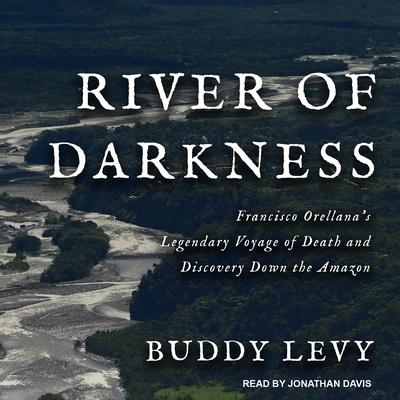 River of Darkness: Francisco Orellana's Legendary Voyage of Death and Discovery Down the Amazon

From the acclaimed author of Conquistador comes this thrilling account of one of history's greatest adventures of discovery. With cinematic immediacy and meticulous attention to historical detail, here is the true story of a legendary sixteenth-century explorer and his death-defying navigation of the Amazon—river of darkness, pathway to gold.

In 1541, the brutal conquistador Gonzalo Pizarro and his well-born lieutenant Francisco Orellana set off from Quito in search of La Canela, South America's rumored Land of Cinnamon, and the fabled El Dorado, "the golden man." Driving an enormous retinue of mercenaries, enslaved natives, horses, hunting dogs, and other animals across the Andes, they watched their proud expedition begin to disintegrate even before they descended into the nightmarish jungle, following the course of a powerful river. Soon hopelessly lost in the swampy labyrinth, their numbers diminishing daily through disease, starvation, and Indian attacks, Pizarro and Orellana made a fateful decision to separate. While Pizarro eventually returned home barefoot and in rags, Orellana and fifty-seven men, in a few fragile craft, continued downriver into the unknown reaches of the mighty Amazon, serenaded by native war drums and the eerie cries of exotic predators. Theirs would be the greater glory.

A richly textured account of the rogue, rebel and visionary whose discovery still resonates today. —Kirkus

Buddy Levy teaches writing and literature at Washington State University and is the author of numerous books, including No Barriers (with Erik Weihenmayer), River of Darkness, and Conquistador, which was a finalist for the 2009 Pacific Northwest Booksellers Association Award. Levy’s essay “Leaps of Faith” was nominated for a Pushcart Prize in 2006. He lives in northern Idaho.