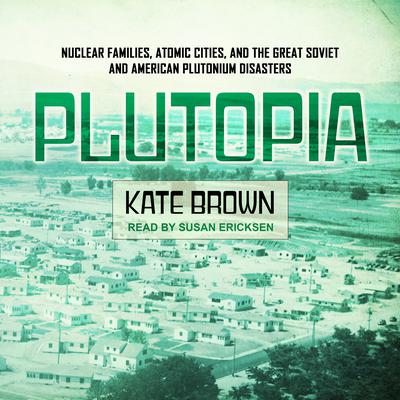 In Plutopia, Kate Brown draws on official records and dozens of interviews to tell the extraordinary stories of Richland, Washington, and Ozersk, Russia—the first two cities in the world to produce plutonium. To contain secrets, American and Soviet leaders created plutopias—communities of nuclear families living in highly subsidized, limited-access atomic cities. Fully employed and medically monitored, the residents of Richland and Ozersk enjoyed all the pleasures of consumer society, while nearby, migrants, prisoners, and soldiers were banned from plutopia—they lived in temporary "staging grounds" and often performed the most dangerous work at the plant. Brown shows that the plants' segregation of permanent and temporary workers and of nuclear and non-nuclear zones created a bubble of immunity, where dumps and accidents were glossed over and plant managers freely embezzled and polluted. In four decades, the Hanford plant near Richland and the Maiak plant near Ozersk each issued at least 200 million curies of radioactive isotopes into the surrounding environment.

An untold and profoundly important piece of Cold War history, Plutopia invites listeners to consider the nuclear footprint left by the arms race and the enormous price of paying for it.

An angry but fascinating account of negligence, incompetence and injustice justified (as it still is) in the name of national security. —Kirkus Starred Review

Kate Brown is an award-winning historian of environmental and nuclear history at the Massachusetts Institute of Technology. Her book Plutopia won seven academic prizes, and Manual for Survival was a finalist for the 2019 National Book Critics Circle Award.