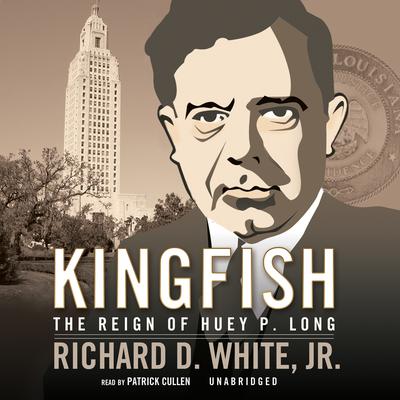 From the moment he took office as governor in 1928 to the day an assassin’s bullet cut him down in 1935, Huey Long wielded all but dictatorial control over the state of Louisiana. A man of shameless ambition and ruthless vindictiveness, Huey orchestrated elections, hired and fired thousands at will, and deployed the state militia as his personal police force. And yet, paradoxically, as governor and later as senator, Huey did more good for the state’s poor and uneducated than any politician before or since.

With Kingfish, White has crafted a balanced, lucid, and absolutely spellbinding portrait of the life and times of the most incendiary figure in American politics.

“Individuals moved by an absolute thirst for control are at once discomfiting and alluring to read about, and White’s careful, straightforward, and sound picture of this American original will do nothing less than disturb and fascinate readers.” —Booklist (starred review)
“LSU professor White's latest is lively and well researched.” —Publishers Weekly
“Patrick Cullen's voice is vital and sure, energetic yet objective…[He] wisely does not try to mimic voices. He reads with intelligence, using White's impeccable research to create a lasting portrait of a flamboyant politician.” —AudioFile
“Political buffs will delight in White's readable account.” —Library Journal
“A faithful retelling of a familiar story. White highlights the vulgar outbursts, bloody fistfights and snake-oil salesmanship that defined ‘the reign of Huey P. Long.’” —New York Times

Richard D. White Jr. is dean of the E. J. Ourso College of Business at Louisiana State University. Dr. White is a Pulitzer Prize–nominated political biographer and author of Kingfish: The Reign of Huey P. Long; Roosevelt the Reformer: Theodore Roosevelt as Civil Service Commissioner, 1889–1895; and Will Rogers: A Political Life. He received a PhD in public administration from Pennsylvania State University, an MBA from Purdue University, and a BA in political science from Old Dominion College. He has published dozens of scholarly articles in prominent journals, including Public Administration Review, Policy Studies Review, Journal of Public Administration Research and Theory, Public Integrity, Journal of Management History, Commonwealth: A Journal of Political Science, and the Christian Science Monitor. Prior to his academic career, Dr. White was a senior officer in the US Coast Guard and served over ten years at sea. He currently lives in Baton Rouge, Louisiana.