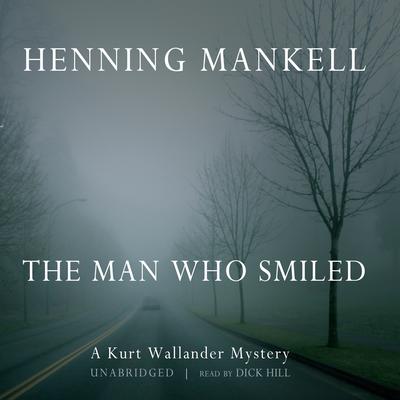 The Man Who Smiled

A disillusioned Inspector Kurt Wallander is thrown back into the fray as both hunter and hunted in this fourth adventure from Sweden’s master of crime and mystery.

Crestfallen, dejected, and spiraling into an alcohol-fuelled depression after killing a man in the line of duty, Inspector Wallander had made up his mind to quit the police force for good. But when an old acquaintance, a solicitor, seeks Wallander’s help and later turns up dead, Wallander realizes that he was wrong not to listen. Warily, he returns to work to head the case. A rookie female detective has joined the force in his absence, and he adopts the role of mentor to her as they fight to unravel the mystery—but the same merciless individuals responsible for the murders are closing in.

“Dick Hill’s performance is a prime example of art that is so finely crafted that it draws no attention to itself. Hill rattles off Swedish character and place names as naturally as a native speaker, and he’s beautifully understated as the gloomy Wallander…Winner of the AudioFile Earphones Award.” —AudioFile
“An exquisitely plotted search for motive and evidence. Dark and moody, this is crime fiction of the highest order.” —Publishers Weekly (starred review)
“An essential purchase for mystery collections.” —Library Journal
“Compelling…skillfully plotted and suspenseful…A thriller for the thinking reader.” —