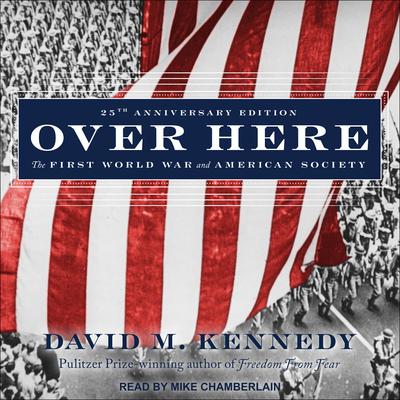 Over Here: The First World War and American Society

Finalist for the 1981 Pulitzer Prize for History

The Great War of 1914–1918 confronted the United States with one of the most wrenching crises in the nation's history. It also left a residue of disruption and disillusion that spawned an even more ruinous conflict scarcely a generation later.

Over Here is the single most comprehensive discussion of the impact of World War I on American society. This twenty-fifth anniversary edition includes a new afterword from Pulitzer Prize–winning author David M. Kennedy, that explains his reasons for writing the original edition as well as his opinions on the legacy of Wilsonian idealism, most recently reflected in President George W. Bush's national security strategy. More than a chronicle of the war years, Over Here uses the record of America's experience in the Great War as a prism through which to view early twentieth-century American society. The ways in which America mobilized for the war, chose to fight it, and then went about the business of enshrining it in memory all indicate important aspects of enduring American character. An American history classic, Over Here reflects on a society's struggle with the pains of war, and offers trenchant insights into the birth of modern America.

Libraries will welcome this 25th-anniversary edition of Pulitzer Prize winner Kennedy's critically acclaimed assessment of the impact of World War I on America. —Library Journal

David M. Kennedy is the author of Freedom from Fear, which won the 2000 Pulitzer Prize for History; Over Here: The First World War and American Society, which was nominated for a Pulitzer Prize; and Birth Control in America: The Career of Margaret Sanger, which won a Bancroft Prize. He is the Donald J. McLachlan Professor of History at Stanford University.