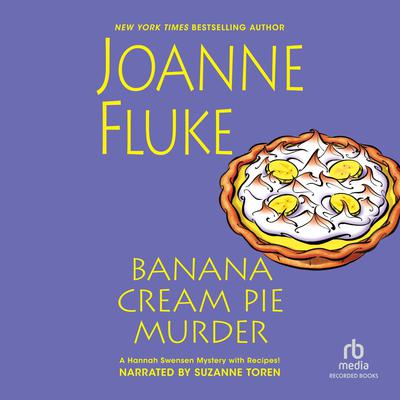 A romantic seven-day cruise is the perfect start to bakery owner Hannah Swensen's marriage. However, with a murder mystery heating up in Lake Eden, Minnesota, it seems the newlywed's homecoming won't be as sweet as she anticipated . . . After an extravagant honeymoon, Hannah's eager to settle down in Lake Eden and turn domestic daydreams into reality. But when her mother's neighbor is discovered murdered in the condo downstairs, reality becomes a nightmarish investigation. Victoria Bascomb, once a renowned stage actress, was active in the theater community during her brief appearance in town . . . and made throngs of enemies along the way. Did a random intruder murder the woman as police claim, or was a deadlier scheme at play? As Hannah peels through countless suspects and some new troubles of her own, solving this crime-and living to tell about it-might prove trickier than mixing up the ultimate banana cream pie . . . Series Overview: There are over four million of Joanne Fluke's Hannah Swensen books in print. This is the 21st installment in the series and it's going stronger than ever. In May 2015, Hallmark® Movies & Mysteries premiered the original movie franchise based on Joanne Fluke's bestselling Hannah Swensen culinary mystery series. Murder She Baked: A Chocolate Chip Cookie Mystery starring Alison Sweeney and Cameron Mathison became the most-watched and highest-rated movie debut in network history, only to be topped in November 2015 with the second movie, based on Plum Pudding Murder. Two additional movies, based on Peach Cobbler Murder and Fudge Cupcake Murder air in 2016. Known as the Queen of Culinary Mystery and honored by RT Book Awards as a "Living Legend," Joanne Fluke's past seven Hannah Swensen books have been Top 15 New York Times hardcover bestsellers. Joanne Fluke's Lake Eden Cookbook was a Top 10 New York Times Bestselling Cookbook. The Hannah Swensen Mystery Series have been translated into seven languages. Fluke's titles are consistently chosen as Main Selections or Featured Alternates of The Mystery Guild, Doubleday, and Book of the Month Club.

Joanne Fluke is the New York Times bestselling author of numerous novels and is best known for her Hannah Swensen mysteries with more than twenty books in the series. Before becoming a writer, she worked as a public school teacher, a psychologist, a screenwriter, and a private detectives assistant.