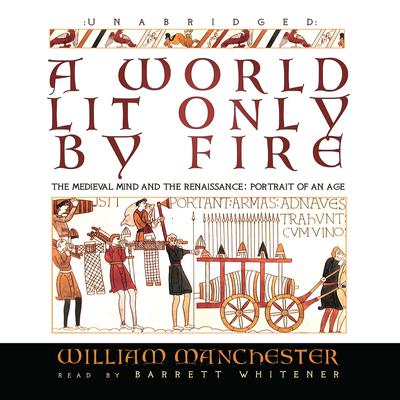 A World Lit Only by Fire: The Medieval Mind and the Renaissance; Portrait of an Age

From tales of chivalrous knights to the barbarity of trial by ordeal, no era has been a greater source of awe, horror, and wonder than the Middle Ages. In handsomely crafted prose and with the grace and authority of his extraordinary gift for narrative history, William Manchester leads us from a civilization tottering on the brink of collapse to the grandeur of its rebirth, the Renaissance, a dense explosion of energy that spawned some of history’s greatest poets, philosophers, and painters, as well as some of its most spectacular villains.

One of the most volatile periods of western history witnessed the passing of the Dark Ages and the dawning of the Renaissance, illuminated by magnificent scientific and artistic achievements and spectacular leaps of thought and imagination. Manchester’s narrative weaves together extraordinary figures, varied elements, and accomplishments of the period.

“Manchester provides easy access to a fascinating age when our modern mentality was just being born.” —Chicago Tribune
“Lively and engaging, full of exquisite details and anecdotes that transform this period—usually murky—into a comprehensive tableau.” —Dallas Morning News
“A captivating, marvelously vivid popular history that humanizes the tumultuous span from the Dark Ages to the dawn of the Renaissance.” —Publishers Weekly
“Manchester has not forgotten the skills that, with invective, eloquence, and anecdote, make him a master storyteller.” —Kirkus Reviews
“An absorbing and readable history.” —School Library Journal