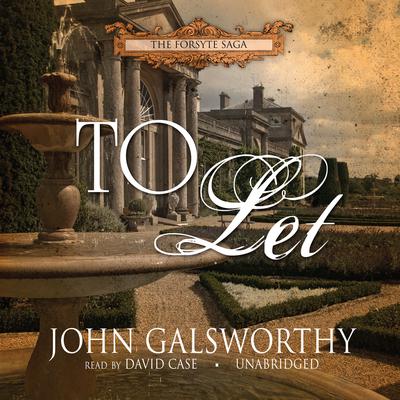 To Let concludes John Galsworthy’s Forsyte Saga, the first trilogy of his epic nine-volume Forsyte Chronicles, which follows the fortunes of the venerable Forsyte family, a moneyed clan whose values are ever at war with its passions.

In To Let, Irene’s son, Jon, and Soames’ daughter, Fleur, now both nineteen years old, fall in love. But when Jon learns of the past feud between their families, he decides that he cannot marry Fleur. To drive her from his mind, he travels to America with his mother, Irene. In despair, Fleur throws herself at her long-standing admirer, Michael Mont, a fashionable baronet’s son, and the two are married.

Meanwhile, Soames Forsyte learns that his second wife, Annette, has been unfaithful to him, and is left desolately contemplating the sale of Robin Hill. When Timothy Forsyte, the last of the old generation, dies at the age of one hundred, the Forsyte family begins to disintegrate.

“A social satire of epic proportions and one that does not suffer by comparison with Thackeray’s Vanity Fair…The whole comedy of manners, convincing both in its fidelity to life and as a work of art.” —New York Times on the Forsyte Chronicles