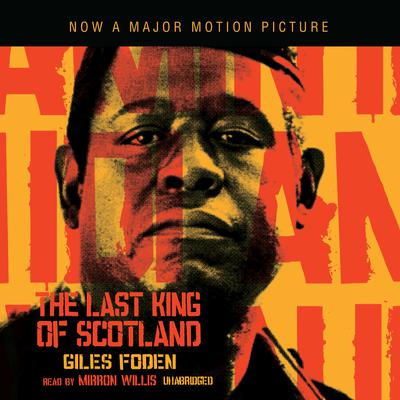 The Last King of Scotland

Winner of the 1998 Whitbread Award

Winner of the Betty Trask Award in 1999

Shortly after his arrival in Uganda, Scottish doctor Nicholas Garrigan is called to the scene of a bizarre accident: Idi Amin, careening down a dirt road in his Maserati, has hit a cow. When Garrigan tends to Amin, the dictator, obsessed with all things Scottish, appoints him as his personal physician. So begins a fateful dalliance with the African leader whose Emperor Jones–style autocracy would transform into a reign of terror.

In The Last King of Scotland, Foden’s Amin is as ridiculous as he is abhorrent: a self-proclaimed cannibal who, at the end of his eight years in power, would be responsible for 300,000 deaths. As Garrigan awakens to his patient’s barbarism—and his own complicity in it—we enter a venturesome meditation on conscience, charisma, and the slow corruption of the human heart.

“A decidedly quirky yet absorbing first novel…brings to mind the diabolical Evelyn Waugh.” —Los Angeles Times Book Review
“A sobering reality check and an impressive work of fiction.” —Washington Times
“Genuinely beautiful and disturbing.” —Village Voice
“Garrigan is the perfect foil for Amin, whose overwhelming physical presence, peacockish rhetoric and cold-blooded savagery are so well captured as to make this novel more than a mesmerizing read: it is also a forceful account of a surrealistic and especially ugly chapter of modern history.” —Publishers Weekly
“Narrator Mirron Willis presents a dazzling cast of characters, including African tribesmen, diplomats, Scots, and Brits, all with vocal authority, clarity, and believability…Willis’ work is instrumental in bringing readers face-to-face with Garrigan’s moral dilemma as he descends from well-meaning physician to political accomplice.” —AudioFile
“It would be simple enough to make the dictator merely monstrous, but Foden defies expectation, rendering him appealing even as he terrifies…And Garrigan makes a fine stand-in for Conrad’s Marlow as he travels up a river of blood from naiveté to horrified recognition of his own complicity. As if this weren’t enough, Foden also treats us to a finely drawn portrait of Africa in all its natural, political, and social complexity.” —Amazon.com Review
“Forest Whitaker took home the Oscar for the cinematic portrayal of the Ugandan dictator, Idi Amin in The Last King of Scotland in 2006. However, Mirron Willis’ narration of the audiobook by the same name surpasses Whitaker’s performance…In addition to narrating the first-hand account through Garrigan’s eyes, Willis must establish a slew of vocal characters, including the aggressive and African-accented Amin and the timid and Scottish-accented Garrigan. Through all fourteen hours of this audiobook, Willis maintains an intensity and sincerity in his narration that few screen actors could match.” —Foreword
“A remarkable debut novel by British journalist Foden, who describes in the best Conradian tones an idealistic young physician’s descent into the maelstrom of Idi Amin’s Uganda…Lurid and delightful, written with wit and real maturity.” —Kirkus Reviews

Giles Foden was born in England in 1967. As a child he moved with his family to Africa, where they lived in various countries until 1993. He was an editor of the Times Literary Supplement before joining the staff of the Guardian. He lives in London.