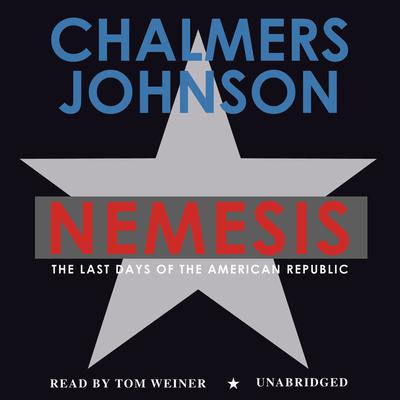 Nemesis: The Last Days of the American Republic

This final volume of Chalmers Johnson's bestsellingBlowbacktrilogy confronts the overreaching of the American empire and the threat it poses to the republic.

In his prophetic bookBlowback, Johnson linked the CIA's clandestine activities abroad to disaster at home. InThe Sorrows of Empire, he explored how the growth of American militarism has jeopardized our security. Now, inNemesis, he shows how American imperialism undermines the republic itself, both economically and politically.

Drawing comparisons to empires past, Johnson explores in vivid detail the likely consequences of our dependence on a permanent war economy and what it will mean when the globe's sole "hyperpower," no longer capable of paying for the vaulting ambitions of its leaders, becomes the greatest hyper-debtor of all time. In his stunning conclusion, Johnson suggests that the crisis of a financial breakdown could ultimately prove to be the only path to a renewed nation.

“Johnson’s important new book is something with which anyone who aspires to a worthwhile opinion about this country’s future must now contend.” —Los Angeles Times
“A biting, often effective indictment of some ugly and troubling features of America’s foreign policy and domestic politics.” —Publishers Weekly
“As Johnson outlines the ‘dangerous path’ the United States has forged, narrator Tom Weiner’s steady, deep voice offers comfort to a rocky journey…Weiner’s voice of reason resonates as listeners are left questioning our future.” —AudioFile
“[Nemesis] continues the author’s broad condemnation of American foreign policy by warning of imminent constitutional and economic collapse.” —Booklist

Chalmers Johnson, president of the Japan Policy Research Institute, is the author of the bestselling books Blowback, The Sorrows of Empire, and Nemesis, which make up his Blowback Trilogy. He has written for the Los Angeles Times, the London Review of Books, Harper’s Magazine, Nation, and TomDispatch.com. He lives near San Diego, California.