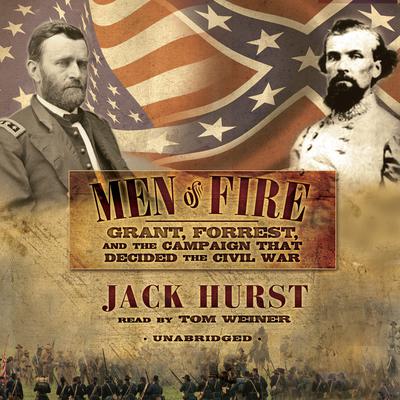 Men of Fire: Grant, Forrest, and the Campaign That Decided the Civil War

In 1862, Ulysses S. Grant achieved what President Lincoln had sought since the start of the war: the first decisive Union victory. Fought on the western edge of the theater, the Forts Henry and Donelson campaign was a gruesome omen of what was to come.

Grant, until then an obscure brigadier general with a reputation for drink, became the fighting man of the hour, earning the nickname “Unconditional Surrender” Grant for his relentless pounding of the Confederates. But he had a match in ruthlessness in Lieutenant Colonel Nathan Bedford Forrest. Forrest, cavalry commander in the Henry and Donelson campaign, proved a counterweight to Grant: quick and nimble to the former’s steady plodding, a ruthless slaveholder and future KKK Grand Wizard to Grant’s abolitionism.

Hurst captures the battle of these two great men and armies in all its destructive glory.

“Men of Fire is a riveting account of the making of two great military leaders, and two battles that transformed America.” —Oxford Town
“Writing forcefully and engagingly, Hurst does a thorough job of reconstructing the military aspects of the battle and never shies away from illuminating the war’s horror.” —Publishers Weekly
“Tom Weiner’s narration reflects the accuracy and detail of Hurst’s research. Weiner has a newscaster’s timbre and delivery. He pauses before quotations and gets into the character of whoever is speaking—Southerner, Midwesterner, country boy, officer. Listening is like getting messages from the past. History buffs should love this chronicle of the lesser-known western war.” —AudioFile
“Hurst’s rendition of Confederate councils demonstrates his comprehensive grip on sources, as well as his ability to convert research into dramatic storytelling. On the federal side, Hurst focuses on Grant’s rise not only on the battlefield, but also within officer politics. With palpable outrage, Hurst narrates insinuations of intoxication against Grant by Henry Halleck, contrasting the latter’s ignoble jealousies with the battlefield miseries of soldiers fighting in winter mud. Speculative and opinionated Hurst can be, but his style hardly handicaps readers who love debating details of Civil War battles.” —Booklist

Jack Hurst is a historian and former journalist who has written for newspapers including the Chicago Tribune, Philadelphia Inquirer, and Nashville Tennessean. His books include Nathan Bedford Forrest: A Biography and Men of Fire. A native of Maryville, Tennessee, and a descendant of both Union and Confederate soldiers, he currently lives with his wife outside Nashville, Tennessee.