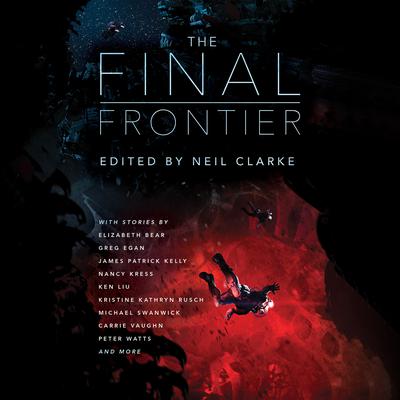 The Final Frontier: Stories of Exploring Space, Colonizing the Universe, and First Contact

The vast and mysterious universe is explored in this reprint anthology from award-winning editor and anthologist Neil Clarke (Clarkesworld magazine, The Best Science Fiction of the Year).

The urge to explore and discover is a natural and universal one, and the edge of the unknown is expanded with each passing year as scientific advancements inch us closer and closer to the outer reaches of our solar system and the galaxies beyond them.

Generations of writers have explored these new frontiers and the endless possibilities they present in great detail. With galaxy-spanning adventures of discovery and adventure, from generations ships to warp drives, exploring new worlds to first contacts, science fiction writers have given readers increasingly new and alien ways to look out into our broad and sprawling universe.

The Final Frontier delivers stories from across this literary spectrum, a reminder that the universe is far large and brimming with possibilities than we could ever imagine, as hard as we may try.

“A miniature version of the many-voiced conversation that is the SF genre…There’s life in the old genre yet.” —Locus Magazine
“Twenty one fascinating tales from some of science fiction’s new stars. The reprint collection is multicultural and diverse, with tales of all kinds and from some unusual places…Many standouts in this one and likely something here for all sorts of different kinds of folks.” —Manhattan Book Review (4.5/5 stars)
“Clarke’s stellar reprint anthology explores the expansive variety of space exploration stories…Outstanding works in which extreme environments bring out the best and worst of human nature.” —Publishers Weekly (starred review)
“The wonders and perils of life among the stars are captured imaginatively in this sci-fi collection with a narration style as eclectic as the stories themselves. The five narrators take turns creating distinctive inflections ranging from breathless wonder to bone-deep cynicism, matching the tone of each story. The voices include a variety of aliens and artificial intelligences as well as accents for far-flung humans. (How does one even create a voice for a creature without a mouth?) This talented ensemble tackles the challenges with ease, expressively defining each story within its self-contained universe while also connecting it to the broader themes of curiosity, excitement, and fear of the possibilities at the edges of the galactic frontier.” —AudioFile

Ken Liu is one of the most lauded authors in the field of American literature. A winner of the Nebula, Hugo, World Fantasy, Locus Sidewise, and Science Fiction & Fantasy Translation Awards, he has also been nominated for the Sturgeon and Locus Awards. His short story, “The Paper Menagerie,” is the first work of fiction to simultaneously win the Nebula, Hugo, and World Fantasy Awards. He also translated the 2015 Hugo Award–winning novel The Three-Body Problem, written by Cixin Liu, which is the first novel to ever win the Hugo award in translation. The Grace of Kings, his debut novel, is the first volume in a silkpunk epic fantasy series set in a universe he and his wife, artist Lisa Tang Liu, created together. It was a finalist for a Nebula Award and the recipient of the Locus Award for Best First Novel.