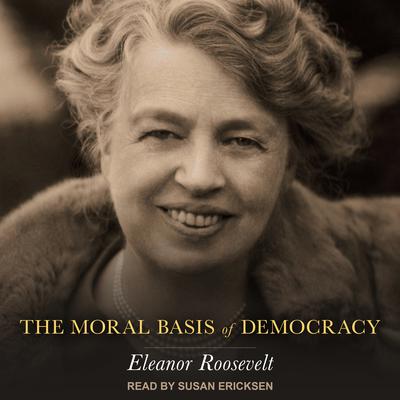 The Moral Basis of Democracy

With the threat of the Third Reich looming, Eleanor Roosevelt employs the history of human rights to establish the idea that at the core of democracy is a spiritual responsibility to other citizens. Roosevelt then calls on all Americans, especially the youth, to prioritize the well-being of others and have faith that their fellow citizens will protect them in return. She defines this trust between people as a trait of true democracy.

Roosevelt advances an optimistic model for the democracy of the future, and although we've taken some steps in the direction of her vision, it's still a long way from reality. The issues first addressed in this 1940 essay—namely financial inequality and racial discrimination—are sadly still relevant today, as bigotry continues to undermine our national unity.

Her first publication as first lady, The Moral Basis of Democracy is an honest and heartfelt call for all Americans to choose love and faith over hatred and fear. Roosevelt takes an inspiring stance in defense of democracy, progress, and morality; the wisdom imparted here is timeless, and a must-listen for every American.

Anna Eleanor Roosevelt (1884–1962) was the wife of Franklin Delano Roosevelt and the mother their six children. She was an American politician, diplomat, and activist. She was the longest-serving First Lady of the United States, holding the post from March 1933 to April 1945. She made Gallup's list of “People that Americans Most Widely Admired in the 20th Century,” and Time's “The 25 Most Powerful Women of the Past Century.” She also served as delegate to the United Nations General Assembly, representative to the Commission on Human Rights under Harry S. Truman, and chairwoman of the Presidential Commission on the Status of Women under John F. Kennedy.