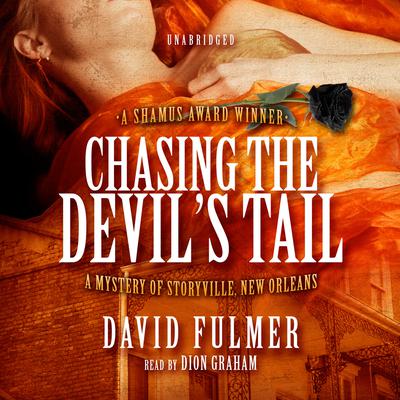 Chasing the Devil’s Tail: A Mystery of Storyville, New Orleans

Winner of the 2002 Shamus Award for Best First P.I. Novel

In the raucous, bloody, red-light district of Storyville, New Orleans, in 1907, where two thousand scarlet women practice their trade in grand mansions and filthy dime-a-trick cribs, where cocaine and opium are sold over the counter, and where rye whiskey flows like an amber river, there's a killer loose. Someone is murdering Storyville prostitutes and marking each killing with a black rose.

As Creole detective Valentin St. Cyr begins to investigate, he encounters a cast of characters drawn from history: Tom Anderson, the political boss who runs Storyville like a private kingdom; Lulu White, the district's most notorious madam; a young piano player who would come to be known as Jelly Roll Morton; and Buddy Bolden, the man who all but invented jazz and is now losing his mind.

No ordinary mystery, Chasing the Devil's Tail is a chilling portrait of musical genius and self-destruction, set at the moment when jazz was born.

“An exotic and erotic mixture of things we like—jazz, pimps, prostitutes, murder, and dirty politics.” —Nelson DeMille, New York Times bestselling author
“In the tradition of The Alienist, Chasing the Devil’s Tail gives us top-notch suspense fiction in a delightfully evocative, and harrowing, time and place: in this case, New Orleans’ Storyville at the beginning of the twentieth century. We immediately fall under author Fulmer’s spell and are soon roaming the authentic haunts of that neighborhood in the company of his characters—some good and some not so, but all wonderfully colorful and as reall as the blues.” —Jeffery Deaver, New York Times bestselling author
“A beautifully constructed, elegantly presented time trip to a New Orleans of the very early 1900s.” —Los Angeles Times
“Captures Storyville in all its creative, mystical, and sordid excess.” —Atlanta Journal-Constitution
“A wonderful rendition of a particular world at a very distinctive time.” —Times-Picayune
“Debut novelist David Fulmer has created an amazing story, and he makes it look easy.” —Cleveland Plain Dealer
“[A] riveting and provocative debut mystery of sex, alcohol, drugs, insanity and murder…Fulmer’s use of historical figures…authenticate[s] an already believable and spellbinding story, which will echo in the reader’s mind like the mournful notes of good blues.” —Publishers Weekly (starred review)
“Dion Graham is a masterful narrator. His clear, crisp voice shifts seamlessly from the storyteller to the myriad characters who populate this fascinating story…The story is energized by a compelling narration, which propels listeners into this sordid slice of American history.” —AudioFile
“A fine beginning to what looks like a first-rate historical series.” —Booklist
“America, as Whitman recognized with his ever-changing editions of Leaves of Grass, and as early New Orleans musicians beating out red-hot jazz on the anvil of that odd timeless place knew, has never been about being, but about becoming. Our daily lives are mysteries because they’re forever moving away from us. David Fulmer seems to know that, too, and provides in Chasing the Devil’s Tail a mirror to help us keep oriented in this rush forward. I could almost taste fried shrimp and smell the sweetness of magnolia blossoms, almost hear Buddy Bolden’s cornet calling to us across the hot evening.” —James Sallis, author of Drive and the Lew Griffin mysteries

David Fulmer is the author of numerous critically acclaimed novels. Chasing the Devil’s Tail was nominated for a Los Angeles Times Mystery/Thriller Book Prize, a Barry Award, and a Falcon Award, was on Borders’ Best of 2003 List, and won a Shamus Award. His other books have received equally venerable accolades, including superlative reviews from the New York Times, USA Today, Publishers Weekly, the San Francisco Chronicle, the Washington Post, and numerous other publications. A native of central Pennsylvania, he lives in Atlanta with his daughter Italia.