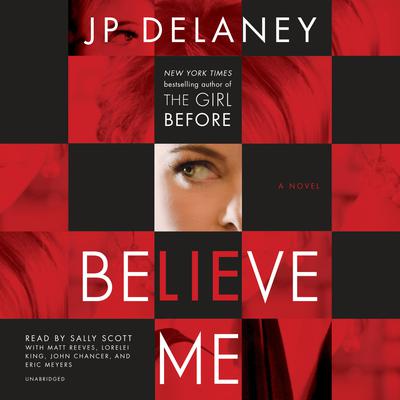 Believe Me: A Novel

By JP Delaney
Read by Sally Scott , with  a full cast

A Booklist Pick of the Top Ten Crime Fiction Audiobooks

In this twisty psychological thriller from the New York Times bestselling author of The Girl Before, an actress plays both sides of a murder investigation.

“A compelling read . . . redefines the concept of an unreliable narrator . . . [a] rich, nuanced, highly literary take on the Gone Girl theme.”—Booklist (starred review)

A struggling actor, a Brit in America without a green card, Claire needs work and money to survive. Then she gets both. But nothing like she expected.

Claire agrees to become a decoy for a firm of divorce lawyers. Hired to entrap straying husbands, she must catch them on tape with their seductive propositions.

The rules? Never hit on the mark directly. Make it clear you’re available, but he has to proposition you, not the other way around. The firm is after evidence, not coercion. The innocent have nothing to hide.

Then the game changes.

When the wife of one of Claire’s targets is violently murdered, the cops are sure the husband is to blame. Desperate to catch him before he kills again, they enlist Claire to lure him into a confession.

Claire can do this. She’s brilliant at assuming a voice and an identity. For a woman who’s mastered the art of manipulation, how difficult could it be to tempt a killer into a trap?

A compelling read . . . redefines the concept of an unreliable narrator . . . [a] rich, nuanced, highly literary take on the Gone Girl theme. —Booklist (starred review)
Fast-paced . . . A solid pick from bestselling author [JP] Delaney for readers who enjoyed the paranoia factor in A.J. Finn’s The Woman in the Window or the unreliable narrator of Paula Hawkins’s The Girl on the Train. The domestic thriller trend is showing no signs of slowing. Buy accordingly. —Library Journal
An intense, stylish psychological thriller. —Good Housekeeping
A dark and haunting thriller . . . A superb evocation of conflicted emotions, this never lets you guess what’s coming next. —Daily Mail
“The author produces a bobsled run’s worth of twists. —Publishers Weekly
I so enjoyed it—what a twisty, exciting read. —Sabine Durrant, author of Lie With Me
A pitch-perfect novel of psychological suspense. —Lee Child
The pages fly. —USA Today
The Girl Before generates a fast pace. —The New York Times
Get hooked on this hair-raiser. —Cosmopolitan
[A] must-read. —New York Post
Almost unbearably suspenseful. —Joseph Finder
A masterfully crafted spellbinder. —Booklist (starred review)
Superior psychological suspense. —The Bookseller
A sexy murder mystery. —InStyle
“Scenes of imagined dramatizations voiced by multiple narrators add a sense of unreality to this unsettling tale of an unbalanced actress, expertly captured in reader Scott’s light English accent.” —Booklist (starred audio review)

JP Delaney is a pseudonym for a writer who has previously written best-selling fiction under other names. Delaney is the author of the New York Times bestseller The Girl Before.