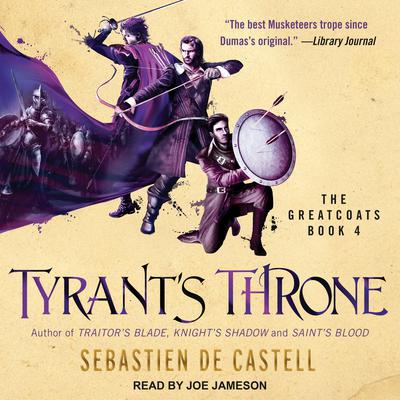 After years of struggle and sacrifice, Falcio val Mond, First Cantor of the Greatcoats, is on the brink of fulfilling his dead king's dream: Aline, the king's daughter, is about to take the throne and restore the rule of law once and for all.

But for the Greatcoats, nothing is ever that simple. In the neighboring country of Avares, an enigmatic new warlord is uniting the barbarian armies that have long plagued Tristia's borders—and even worse, he is rumored to have a new ally: Trin, who's twice tried to kill Aline to claim the throne of Tristia for herself. With the armies of Avares at her back, led by a bloodthirsty warrior, she'll be unstoppable.

Falcio, Kest, and Brasti race north to stop her, but in those cold and treacherous climes they discover something altogether different, and far more dangerous: a new player is planning to take the throne of Tristia, and with a sense of dread the three friends realize that the Greatcoats, for all their skill, may not be able to stop him.

Sebastien de Castell had just finished a degree in archaeology when he started work on his first dig. Four hours later he realized how much he actually hated archaeology and left to pursue a very focused career as a musician, ombudsman, interaction designer, fight choreographer, teacher, project manager, actor, and product strategist. Sebastien lives in Vancouver, Canada, with his lovely wife and two belligerent cats.