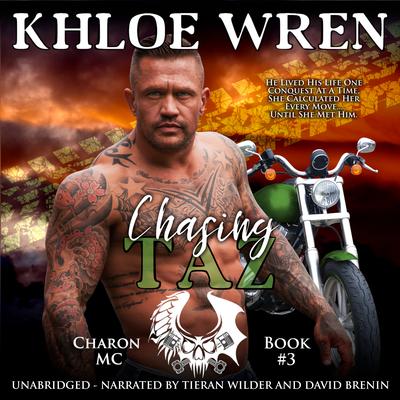 By Khloe Wren
Read by Tieran Wilder  and David Brenin

He lived his life one conquest at a time. She calculated her every move … until she met him.

Former Marine Donovan “Taz” Lee might appear to be a carefree Aussie bloke living it up as a member of the Texan motorcycle club, Charon MC, but the truth is so much more complicated. With blood and tears haunting his past and threatening to destroy his future, Taz is completely unprepared for the woman of his dreams, when she comes in and knocks him on his ass. Literally.

Felicity “Flick” Vaughn joined the FBI to get answers behind her brother’s dishonorable discharge and abandonment of his family. Knowing Taz was a part of her brother’s final mission, she agrees to partner with him to go after a bigger club, The Satan’s Cowboys MC.

However, nothing in life is ever simple and Flick is totally unprepared to have genuine feelings for the sexy Aussie. When secrets are revealed and their worlds are busted wide open, will they be strong enough to still be standing when the dust settles?

Khloe Wren grew up in the Adelaide Hills before her parents moved the family to country South Australia when she was a teen. A few years later, Khloe moved to Melbourne which was where she got her first taste of big city living.

After a few years living in the big city, she missed the fresh air and space of country living so returned to rural South Australia. Khloe currently lives in the Murraylands with her incredibly patient husband, two strong willed young daughters, and an ever growing list of animals.

While Khloe doesn’t ride a bike herself, she loves riding pillion behind her husband on the rare occasion they get to go out without their daughters.