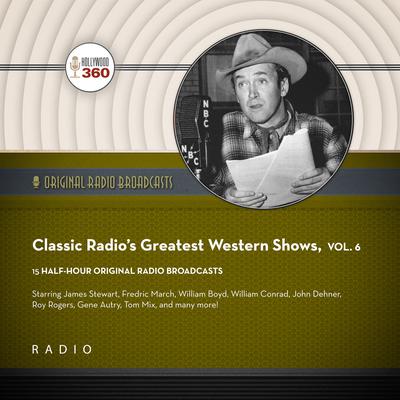 Enjoy fifteen of the greatest western shows from radio’s Golden Age and the Hollywood celebrities that starred in them.

The Golden Age of radio had incredible western shows that kept Americans glued to their radio sets. Families gathered around their living room radios to hear western heroes catch the bad guys and save ladies in distress. This collection includes James Stewart in “Broken Arrow” on Screen Directors Playhouse, Fredric March as Wild Bill Hickok in “The Plainsman” on Lux Radio Theatre, William Boyd as “Hopalong Cassidy,” William Conrad as US Marshal Matt Dillon in Gunsmoke, John Dehner as the man known as “Paladin” in Have Gun—Will Travel, Roy Rogers, Gene Autry, The Cisco Kid, Tom Mix, and many more!