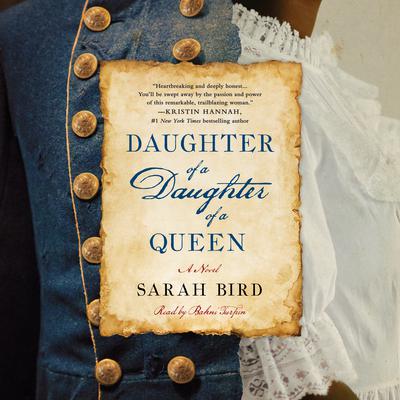 Among longlisted titles for Christian Science Monitor Best Books of the Year, 2018

This program includes a bonus conversation with the author and is read by acclaimed narrator Bahni Turpin, whose voice listeners will recognize from The Hate U Give, Children of Blood and Bone, and The Underground Railroad.

From author Sarah Bird comes the compelling, hidden story of Cathy Williams, a former slave and the only woman to ever serve with the legendary Buffalo Soldiers.

“Here’s the first thing you need to know about Miss Cathy Williams: I am the daughter of a daughter of a queen and my mama never let me forget it.”

Though born into bondage on a “miserable tobacco farm” in Little Dixie, Missouri, Cathy Williams was never allowed to considered herself a slave. According to her mother, she was a captive, bound by her noble warrior blood to escape the enemy. Her means of deliverance is Union general Phillip Henry “Smash ‘em Up” Sheridan, the outcast of West Point who takes the rawboned, prideful young woman into service. At war’s end, having tasted freedom, Cathy refuses to return to servitude and makes the monumental decision to disguise herself as a man and join the Army’s legendary Buffalo Soldiers.

Alone now in the ultimate man’s world, Cathy must fight not only for her survival and freedom, but she vows to never give up on finding her mother, her little sister, and the love of the only man strong and noble enough to win her heart. Inspired by the stunning, true story of Private Williams, this American heroine

"Daughter of a Daughter of a Queen is Sarah Bird at her very best — witty, heartbreaking, and deeply honest. The carefully researched, richly imagined story of Cathy Williams is a beautiful reminder of a forgotten part of women's history." – Kristin Hannah, #1 New York Times bestselling author

Narrator Bahni Turpin beautifully performs this novel. —AudioFile
“The carefully researched, richly imagined story of Cathy Williams is a beautiful reminder of a forgotten part of women’s history.” —Kristin Hannah, New York Times bestselling author
“This fearless, often heartbreaking account sheds a welcome light on an extraordinary American warrior.” —Publisher’s Weekly (starred reivew)
“Narrator Bahni Turpin beautifully performs this novel based on the real-life story of Cathy Williams…Turpin skillfully delivers every nuance of Cathy’s emotions—the pain of being separated from her family, the tenderness of first love, the fear of rape, and the determination to pull her weight—as well as the immense cost of her choices. The audiobook includes an interview with the author, who discusses her research.” —AudioFile
"[A] rollicking epic…[and] a high-energy page-turner that combines vividly re-created historical figures and events with a wild mustang of a plot and an embattled secret love…The travails of this woman-pretending-to-be-a-man echo across the centuries. Rapturously imagined and shamelessly entertaining.” —Kirkus Reviews
“An admiring novel about a groundbreaking, mentally tough woman.” —Booklist