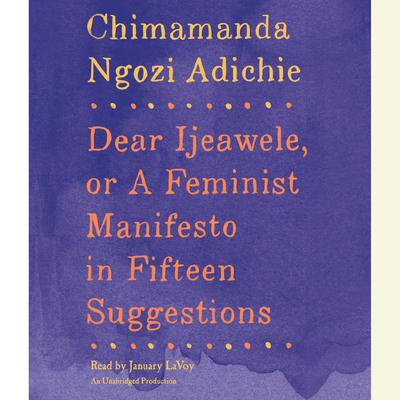 Dear Ijeawele, or A Feminist Manifesto in Fifteen Suggestions

A BookRiot Pick of Best Books We Read This Month

A Bustle Pick of 20 Best Nonfiction Book in March

From the best-selling author of Americanah and We Should All Be Feminists comes a powerful new statement about feminism today--written as a letter to a friend.

A few years ago, Chimamanda Ngozi Adichie received a letter from a dear friend from childhood, asking her how to raise her baby girl as a feminist. Dear Ijeawele is Adichie's letter of response.
Here are fifteen invaluable suggestions--compelling, direct, wryly funny, and perceptive--for how to empower a daughter to become a strong, independent woman. From encouraging her to choose a helicopter, and not only a doll, as a toy if she so desires; having open conversations with her about clothes, makeup, and sexuality; debunking the myth that women are somehow biologically arranged to be in the kitchen making dinner, and that men can "allow" women to have full careers, Dear Ijeawele goes right to the heart of sexual politics in the twenty-first century. It will start a new and urgently needed conversation about what it really means to be a woman today.

Chimamanda Ngozi Adichie has had three books on the New York Times bestselling list. She grew up in Nigeria. Her work has been translated into thirty languages and has appeared in various publications, including the New Yorker. Her novel Half of a Yellow Sun won the Orange Broadband Prize and was a finalist for the National Book Critics Circle Award, and it was a New York Times Notable Book and a People and Black Issues Book Review Best Book of the Year. Her first novel, Purple Hibiscus, won the Commonwealth Writers’ Prize and the Hurston/Wright Legacy Award. She is a recipient of a 2008 MacArthur Foundation Fellowship.