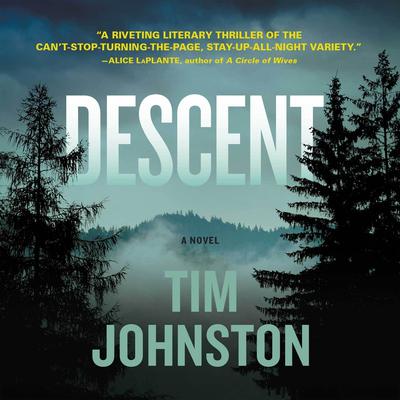 An Oprah Pick of Ten Titles to Pick Up Now

From the day Caitlin vanishes the lives of her family members are irrevocably altered, each assuming blame for that day's tragic events. As the initial days of hope are replaced by weeks of anxiety and despair, they find themselves increasingly isolated, each wondering: Is she still alive? Will we ever know what happened? Pursuing every angle and refusing to surrender the belief that his daughter is still alive, Caitlin's father struggles through the mountainous terrain, prodding both his son and the local authorities to keep up the search. It is through a most unlikely source, however, that they finally find an answer, in a climax that is stunning in both its execution and resolution. Written with precision and elegance, Johnston captures characters' emotions, divergent thoughts, and moments of bleak loneliness as they search for answers. Descent is both a taut and gripping thriller and a work of outstanding literary merit, a combination of great story and beautiful writing that is certain to garner comparisons with the work of such bestselling writers as Cormac McCarthy and Dennis Lehane.

“Johnston has a superhuman gift for watching and listening to the world and rendering, on the page, its beauty and savagery with such detail and power that the story feels almost more like memory than something read. I was so absorbed in the final incredible fifty pages that I missed my flight to La Guardia.” —Mary Roach, New York Times bestselling author of Bonk
“Tim Johnston has done a great job not just in creating his characters but creating the character of the Courtland family. If you enjoy vivid writing, intelligent plots, and gnawing your knuckles, you will love Descent.” —Susan Isaacs, New York Times bestselling author
“[A] twisty thriller about a family grappling with loss.” —O, The Oprah Magazine
“Tim Johnston’s high-wire literary thriller…will leave you gasping.” —Vanity Fair
“Outstanding…The days when you had to choose between a great story and a great piece of writing? Gone.” —Esquire
“The story unfolds brilliantly, always surprisingly…The magic of his prose equals the horror of Johnston’s story; each somehow enhances the other…[An] astonishing novel.” —Washington Post
“An original and psychologically deep thriller.” —Outside magazine
“Johnston has a poet’s eye for the majestic and forbidding nature of the Rockies and a sociologist’s understanding of how people act under pressure. He also has a knack for creating characters that the reader will come to care about…Combining domestic drama with wilderness adventure, Johnston has created a hybrid novel that is as emotionally satisfying as it is viscerally exciting.” —Publishers Weekly (starred review)
“Xe Sands and R. C. Bray narrate alternating perspectives in this thriller. Sands adopts a smoky sound that parallels the fog surrounding the book’s major characters…Bray embodies Caitlin’s brother, Sean, and her father, Grant…The team effort of Sands and Bray makes for an atmospheric, suspenseful production.” —AudioFile
“A riveting literary thriller of the can’t-stop-turning-the-page, stay-up-all-night variety.” —Alice LaPlante, author of A Circle of Wives

Tim Johnston is the author of the novel Descent, the story collection Irish Girl, and the young adult novel Never So Green. Tim’s stories have also appeared in New England Review, New Letters, the Iowa Review, the Missouri Review, Double Take, Best Life Magazine, and Narrative Magazine, among others. He holds degrees from the University of Iowa and the University of Massachusetts–Amherst. He currently teaches in the Creative Writing Program at the University of Memphis.