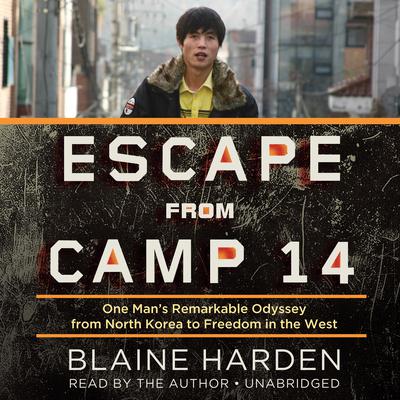 Escape from Camp 14: One Man’s Remarkable Odyssey from North Korea to Freedom in the West

North Korea is isolated and hungry, bankrupt and belligerent. It is also armed with nuclear weapons. Between 150,000 and 200,000 people are being held in its political prison camps, which have existed twice as long as Stalin’s Soviet gulags and twelve times as long as the Nazi concentration camps. Very few born and raised in these camps have escaped—but Shin Dong-hyuk did.

In Escape from Camp 14, acclaimed journalist Blaine Harden tells the story of Shin Dong-hyuk and, through the lens of Shin’s life, unlocks the secrets of the world’s most repressive totalitarian state. Shin knew nothing of civilized existence: he saw his mother as a competitor for food, guards raised him to be a snitch, and he witnessed the execution of his own family. Through Harden’s harrowing narrative of Shin’s life and remarkable escape, he offers an unequaled inside account of one of the world’s darkest nations and a riveting tale of endurance, courage, and survival.

“If you have a soul, you will be changed forever by Blaine Harden’s Escape from Camp 14…Harden masterfully allows us to know Shin, not as a giant but as a man, struggling to understand what was done to him and what he was forced to do to survive. By doing so, Escape from Camp 14 stands as a searing indictment of a depraved regime and a tribute to all those who cling to their humanity in the face of evil.” —Mitchell Zuckoff, New York Times bestselling author of Lost in Shangri-La
“A searing account of one man’s incarceration and personal awakening in North Korea’s highest-security prison…Mr. Harden spares no detail of Mr. Shin’s torment, physical or psychological. He writes in a direct, matter-of-fact style that puts the horrors he is relating in dark relief.” —Wall Street Journal
“Blaine Harden of the Washington Post is an experienced reporter of other hellholes, such as the Congo, Serbia, and Ethiopia. These, he makes clear, are success stories compared to North Korea…Harden deserves a lot more than ‘wow’ for this terrifying, grim, and, at the very end, slightly hopeful story of a damaged man still alive only by chance, whose life, even in freedom, has been dreadful.” —Literary Review (London)
“With a protagonist born into a life of backbreaking labor, cutthroat rivalries, and a nearly complete absence of human affection, Harden’s book reads like a dystopian thriller. But this isn’t fiction—it’s the biography of Shin Dong-hyuk.” —Publishers Weekly
“Harden…tells a gripping story. Readers learn of Shin’s gradual discovery of the world at large, nonadversarial human relationships, literature, and hope—and the struggles ahead. A book that all adults should read.” —Library Journal (starred review)
“A terrifying story of brutal captivity and unremitting misery and the difficult adjustment to subsequent life in a very different place.” —Kirkus Reviews
“This is a story unlike any other…More so than any other book on North Korea, including my own, Escape from Camp 14 exposes the cruelty that is the underpinning of Kim Jong Il’s regime. Blaine Harden, a veteran foreign correspondent from the Washington Post, tells this story masterfully…The integrity of this book shines through on every page.” —Barbara Demick, author of Nothing to Envy: Ordinary Lives in North Korea
“Mr. Shin’s story, at times painful to read, recounts his physical and psychological journey from a lifetime of imprisonment in a closed and unfeeling prison society to the joys and challenges of life in a free society where he can live like a human being.” —Kongdan Oh, coauthor of The Hidden People of North Korea: Everyday Life in the Hermit Kingdom
“Through the extraordinary arc of Shin’s life, Harden illuminates the North Korea that exists beyond the headlines and creates a moving testament to one man’s struggle to retrieve his own lost humanity.” —Marcus Noland, coauthor of Witness to Transformation: Refugee Insights into North Korea

Blaine Harden is a contributor to the Economist and has formerly served as the Washington Post’s bureau chief in East Asia, Eastern Europe, and Africa. He is the author of Africa: Dispatches from a Fragile Continent and A River Lost: The Life and Death of the Columbia. He lives in Seattle, Washington.